The prognostic nutritional index (PNI) is based on the albumin concentration and absolute lymphocyte count and is designed to assess the nutritional and immunological status of patients. In this study, we evaluated the prognostic importance of the preoperative and postoperative PNI in patients who underwent curative resection of pancreatic ductal adenocarcinoma (PDAC).

From 2006 to 2017, 50 patients with PDAC underwent curative resection at our hospital. We performed distal pancreatectomy (DP) with splenectomy in 15 patients, pancreaticoduodenectomy (PD) in 27 patients, PD combined with portal vein partial resection in 6 patients, and total pancreatectomy with splenectomy in 2 patients. We compared the preoperative PNI and postoperative PNI (1 and 2 months postoperatively) and analyzed the prognostic importance for these patients.

Effective postoperative nutrition may have a prognostic benefit for patients with operable PDAC.

The prognostic nutritional index (PNI) is calculated using the following formula: 10×serum albumin concentration (g/dl)+0.005×lymphocyte count (number/mm3) in the peripheral blood.1 Thus, this index reveals patients' immune status and nutritional condition. A low PNI indicates malnutrition, reduced neutrophil function, and reduced immunity.2,3 Additionally, a low preoperative PNI is reportedly associated with a high incidence of postoperative complications.4 Moreover, a significant correlation has been between a low preoperative PNI and poor survival of patients with various neoplasms.5,6,7 These reports indicate that the preoperative PNI may be a good prognostic indicator for patients with cancer.

The prognosis of patients with pancreatic ductal adenocarcinoma (PDAC) is extremely poor. Even if curative resection is performed, many patients die of cancer recurrence within a few months. Yamamoto et al.8 reported that the median survival duration of 195 patients who underwent pancreatic resection was 27.1 months. Additionally, Sato et al.9 reported that in patients who had undergone resection of PDAC in Japan, the estimated 5-year disease-specific survival rate was 23.1% and the disease-free survival rate was 16.8%. Moreover, postoperative complications such as anastomotic leakage between the pancreatic duct and the jejunum after pancreaticoduodenectomy (PD) or pancreatic fistula formation after distal pancreatectomy (DP) occur very frequently after resection of the pancreas. Thus, the nutritional status of many patients with PDAC is likely insufficient during treatment. However, changes in the postoperative PNI compared with the preoperative level and the relationship between the postoperative PNI and patients' prognosis have not been thoroughly studied. Therefore, we evaluated the clinical importance of the preoperative and postoperative PNI as a prognostic marker in patients with PDAC.

Surgical resection is an essential treatment modality for many potentially curable solid tumors. However, surgery induces alterations in patients' immune function. Surgical tissue damage promotes a strong inflammatory response and suppresses components of the immune system that protect against cancer. Thus, such surgical stresses can reportedly accelerate cancer growth and the risk of recurrence and may be correlated with poor patient survival.13,14,15

PD with or without portal vein resection, DP with splenectomy, and total pancreatectomy with splenectomy are common operative procedures for PDAC. These operative procedures are associated with a long operation time and large blood loss volume, and in some cases, blood transfusions are required intraoperatively and postoperatively. Moreover, many patients develop postoperative complications. Thus, the surgical stresses of PDAC resection may be much greater than those of other gastrointestinal malignancies. Such surgical stress may be a poor prognostic factor for patients with resected PDAC.

Improvement of the nutritional status before and after the operation may improve the postoperative prognosis in patients with PDAC.

ACKNOWLEDGEMENTS
We thank Angela Morben, DVM, ELS, from Edanz Group (), for editing a draft of this manuscript. 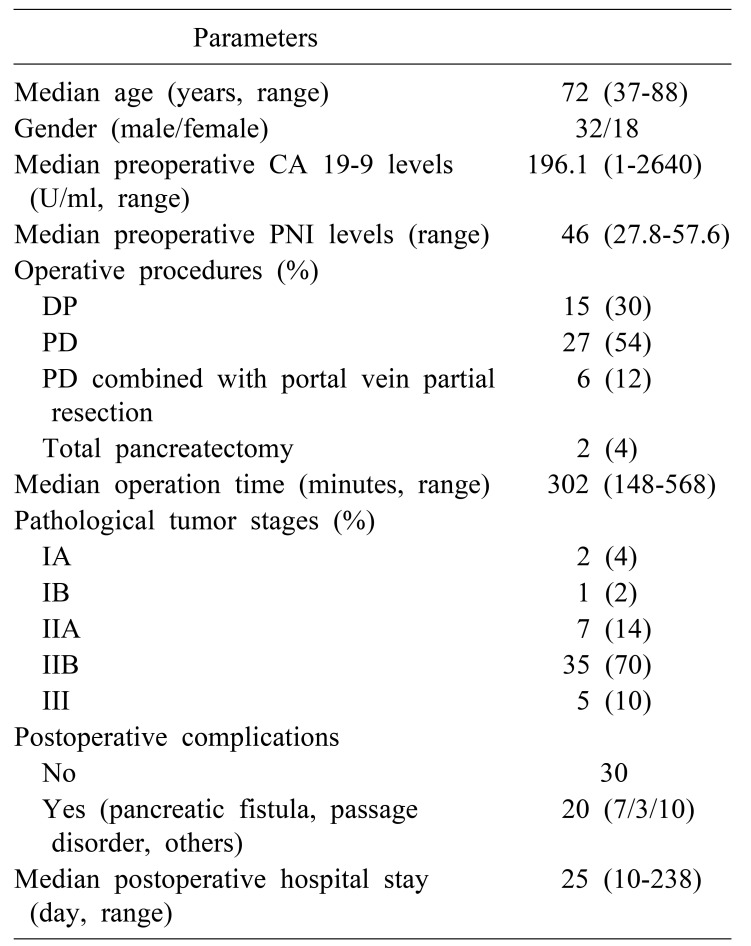 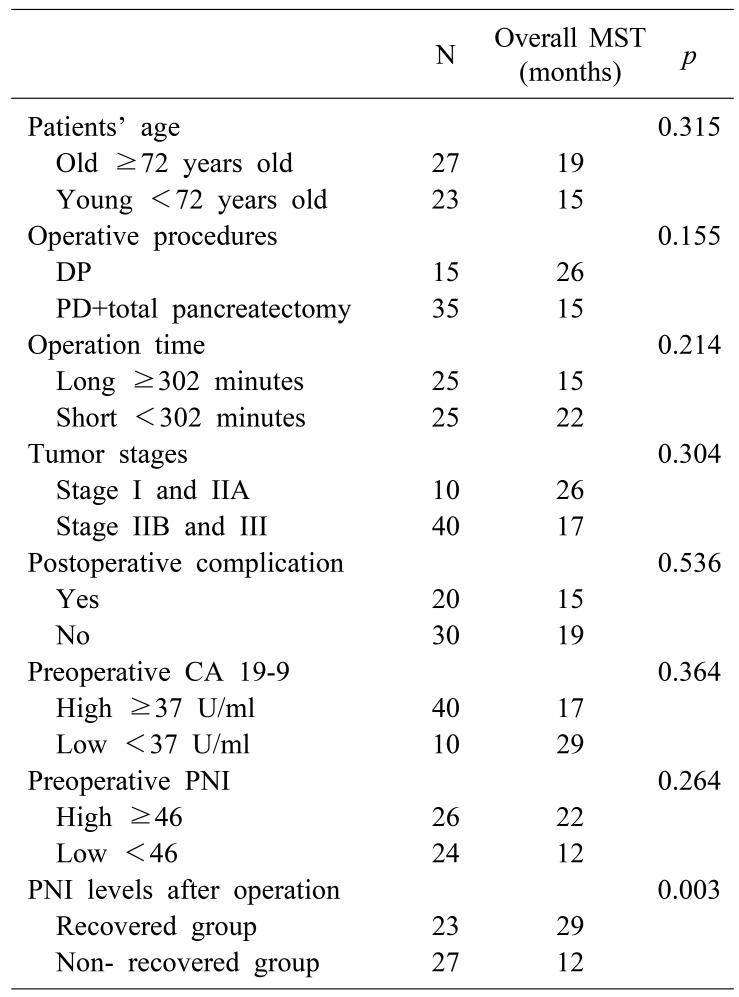 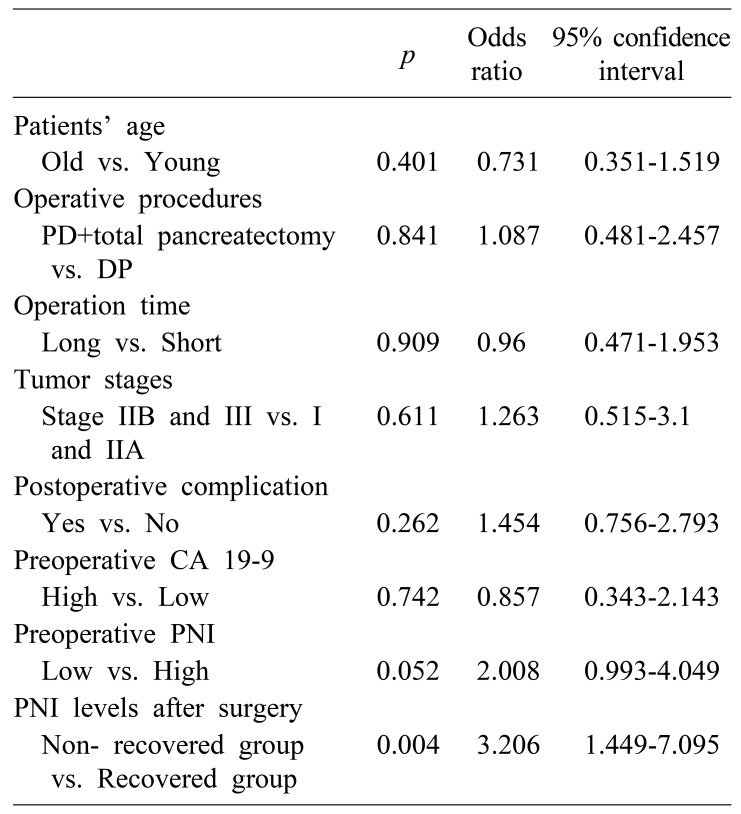