Abstract
Gallstone ileus is an uncommon cause of intestinal obstruction. It may present with typical symptoms of intestinal obstruction with or without biliary sepsis. Its management strategies vary depending on the patient and operative factors. Enterotomy and stone removal alone versus synchronous cholecystectomy and fistula disconnection at the same stage, often pose a debate among surgeons. The decision for operative strategies largely depends on the surgeon’s experience, patient’s physiology, and operative difficulties. As literature on gall stone ileus remains insufficient at a regional level, we report four cases of gallstone ileus managed with different approaches. Three patients were managed in a staged-manner, whereas one patient received a definitive procedure performed at index surgery. Clinical challenges and associated operative strategies are discussed. Findings of the current study were compared to those of the literature. The need for a definitive fistula disconnection and repair or cholecystectomy following stone removal in these patients was subsequently discussed.
Keywords : Gallstone; Intestinal obstruction; Fistula

Gallstone ileus accounted for up to 4% of intestinal obstruction cases in a previous series [1]. It is often is accompanied by a biliary enteric fistula. Its clinical presentation may differ from classical bowel obstruction as patients may present with intermittent abdominal pain or cholangitis due to associated stones in the bile duct. Due to sepsis or dehydration from bowel obstruction, the patient may present with severe volume deficit in extremis [2]. Considering patient’s compromised physiology and complex associated biliary pathology, a fine-tuning of operative planning may result in a better outcome. Conventionally, operative procedures for gallstone ileus include enterotomy with stone removal for the relief of bowel obstruction together with either immediate closure (one-stage surgery) or delayed closure (two-stage surgery) of the biliary enteric fistula. Here we describe four cases, including one case with a one stage surgery, one case with cholecystostomy, stone removal, and T-tube cholecystostomy drain insertion. The remaining two cases had no further surgery on the gallbladder after successful enterotomy. We observed a comparable clinical outcome despite definitive surgery was not performed following stone retrieval. Hence, we intend to describe these clinical courses in detail, including operative findings, interventions, and eventual outcomes of these patients. Written informed consent was obtained from all patients for publication of this case report and accompanying images.

A 54-year-old female presented to us with abdominal distension, nausea, and vomiting for six days. On review, she was severely dehydrated with a pulse rate of 109 beats/min. A physical examination showed a distended abdomen without peritonism. Contrasted computed tomography (CT) scan of the abdomen revealed an intraluminal hyperdense mass at the ileum, resulting in dilatation of the proximal bowel and collapsed distal bowels (Fig. 1A) with associated aerobilia. Laparotomy revealed that small bowels were obstructed due to an impacted gallstone at the terminal ileum that was about 60 cm from the ileocaecal junction. An enterotomy was performed in order to remove the 4-cm impacted stone (Fig. 1B). There were dense adhesions between the gallbladder and the duodenum, suggestive of a cholecystoduodenal fistula. However, no apparent stone was palpable. There were no further attempts to delineate the fistula owing to the initial compromised physiology, no remaining palpable stones, and complex adhesions adjacent to the gallbladder. She was discharged on day 4 post-surgery. She was asymptomatic during her two years of follow-up despite no interval cholecystectomy or fistula repair was performed. 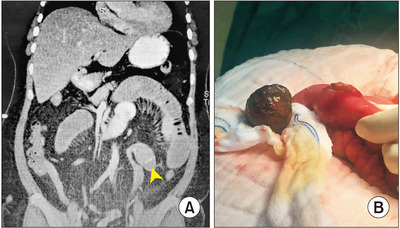 Fig 1. (A) Computed tomography scan of the abdomen revealing an intraluminal hyperdense stone at the ileum (arrowhead) resulting in dilatation of the proximal bowel. (B) Removal of a single gallstone impacting the ileum via enterolithotomy.

A 58-year-old diabetic female presented to us with intermittent right hypochondrium pain for two weeks, together with fever, jaundice, and tea-coloured urine. She had a similar episode of symptoms five months ago, for which an endoscopic ultrasound and an endoscopic retrograde cholangiopancreatography were performed and common bile duct stones were trawled and cleared. She deferred the cholecystectomy due to improvements in her symptoms. On presentation, she was septic and her abdomen was tender over the right hypochondrium without a palpable mass. Blood investigations revealed leukocytosis (16.6 × 109/L), a deranged liver function test with a total bilirubin level of 66 μmol/L, and raised alkaline phosphatase level of 800 U/L. Intravenous cefuroxime and fluid resuscitation were initiated for cholangitis. She developed abdominal distension and vomiting a few days following admission. A CT scan revealed gallstone ileus with a cholecysto-duodenal fistula without bile duct stones retaining (Fig. 2). Liver function tests were normal, correlating well with CT findings of passed-out stone. An emergency laparotomy revealed a single large gallstone that had impacted the terminal ileum, resulting in gross small bowel dilatation (Fig. 3). An enterolithotomy and a small bowel decompression of up to two litres were done. No retained stones were felt in the gallbladder. The fistula was not repaired due to dense adhesion and the patient’s poor general condition. The patient recovered well. She was discharged on day 5 post-surgery. She was asymptomatic throughout her six months of follow-up. Despite two episodes of gallstone disease, she refused any further surgical intervention during the COVID-19 pandemic. 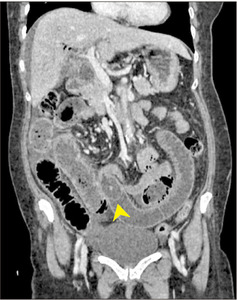 Fig 2. A hyperdense stone in the ileum (arrowhead) with small bowel dilatation shown in computed tomography scan of the abdomen. 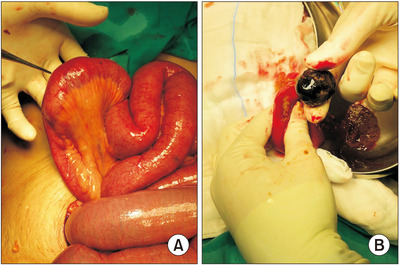 Fig 3. (A) Impacted gallstone at ileum with small bowel dilatation. (B) Enterotomy was done and gallstone was removed.

A 67-year-old female presented with abdominal distension and poor oral intake. She was tachycardic but normotensive. CT scan revealed small bowel obstruction with gallstone ileus (Fig. 4A). She was diagnosed with major depressive disorder with regular follow-up and treatment. Her pre-morbid status was good. Following the initial resuscitation, an exploration of her abdomen revealed that her small bowels were dilated proximal to the terminal ileum with an impacted gallstone. An enterotomy was made to deliver the large gallstone (3 cm in largest diameter) (Fig. 4B). There was dense adhesion surrounding the cholecysto-duodenal fistula at the first and second parts of the duodenum, together with multiple palpable common bile duct stones. The gallbladder was removed via the fundus first approach. Common bile duct was explored and stones were cleared. The duodenal fistula opening was then repaired and covered with omentum. She had an uneventful recovery. She was discharged home after one week of hospital stay. She was asymptomatic throughout her subsequent one-year follow-up. 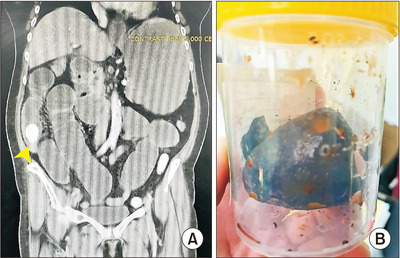 Fig 4. (A) A large gallstone was found in the distal ileum (arrowhead) causing ileus. (B) Gallstone was removed.

A 54-year-old male presented an overt intestinal obstruction. He had a coronary artery bypass grafting done two years ago, with an excellent functional score following surgery. His hemodynamic parameters were within normal limits. His abdomen was distended but not in peritonism. CT scan of the abdomen revealed small bowel obstruction due to a mid-small bowel stone and cholelithiasis. Similar to the previous case, an exploration via a midline laparotomy revealed a large gallstone (measuring about 2 cm × 3 cm in size) impacted at the distal jejunum, causing proximal small bowel dilatation. Enterolithotomy and primary repair were done. However, a few gallstones were felt in the gallbladder with the presence of a large cholecysto-duodenal fistula. There were also dense adhesions between the gallbladder, duodenum, and transverse colon. A cholecystostomy was made to deliver two large gallstones. The gallbladder was closed using the reconstitution technique, followed by insertion of a T-tube as a cholecystostomy drain. The patient’s recovery was uneventful except for delayed removal of the T-tube at day 10 post-surgery. He was well and symptom-free during two years of follow-up.

Complications from gallstone diseases are prevalent but under-reported in Malaysia. Gallstone ileus is one of the less frequent sequalae. There is a lack of local series regarding the description of treatment strategies for this surgical condition [1,3]. In the current series, we described four cases with varying operative strategies (Table 1).

One-stage surgery avoids the risk of recurrent gallstone ileus or biliary sepsis. However, it is more technically demanding. In addition, it carries a higher morbidity rate. Moreover, it is potentially more time-consuming. When done together, it may cause more harm if the definitive procedure is performed under the same setting with relief of bowel obstruction. Previous literature has proposed that such an approach is suitable in low-risk patients with a good physiological reserve with known residual stones [4,5]. The third case in this current series had a similar approach to her treatment as to the aforementioned one-stage surgery, but not the other three cases. In the current series, the deciding points were based on physiological reserves and known residual stones. We also considered anatomical complexity, comorbidities, the availability of senior surgeons, and the availability of intensive care support. Adding more factors into consideration, we modified the approach as in the last case, where the stone was removed via cholecystostomy and closed with a T-tube drain. This operative step might shorten the operative duration and reduce physiological insult and the risk of injuring bile ducts and the duodenum [6,7].

Enterotomy alone is a preferred choice of surgery for a hemodynamically unstable and ill patient with a low physiological reserve as it is quick and straightforward [1,7]. For the first two cases that did not have a cholecystectomy or cholecystostomy done; we did not observe any recurring symptoms at 6 months after operation or beyond, consistent with available literature as the recurrence rate for gallstone ileus post-enterolithotomy is as low as 5% [1,7]. If symptoms do occur, approximately 85% of these recurrences occur within the first 6 months of index presentation [1,5,8]. Fortunately, both patients were well at six months following the surgery. Previous series have also reported that only 10% of patients may require interval cholecystectomy and fistula closure for persistent biliary symptoms due to cholelithiasis or biliary fistula [1,7]. Common symptoms are biliary colic pain, cholecystitis or cholangitis [7]. Hence, as observed in cases described in this report, patients without overt residual stones following enterolithotomy for gallstone ileus who remain asymptomatic may not need a cholecystectomy [9]. Fistula closure can be achieved once obstruction is resolved with a stone-free gallbladder [7,9]. Preoperative imaging and intraoperative palpation of gallbladder and bile duct are crucial to make sure there is no residual stone. The chance of a spontaneous closure of bilioenteric fistulas is up to 61.5% [8]. Some may argue that there is a risk of developing gallbladder malignancy due to persistent patent fistula reflux. However, the actual incidence rate of developing gallbladder malignancy remains low [3]. It has been suggested that a cholecystectomy can be performed at 4 weeks to 6 months after the initial surgery [1], especially for those with persistent biliary symptoms or retained gallstones. Patients with enterolithotomy alone and having no interval cholecystectomy done can receive ursodeoxycholic acid in order to reduce the risk of recurrent gallstone formation [10].

Laparoscopy surgery may play a role in the treatment of gallstone ileus with potential benefits of faster recovery, shorter hospital stay, and lower morbidity than laparotomy [7]. However, attempt with laparoscopic surgery may be considered in selected centers if there is a sufficient operating time with the availability of relevant subspecialty skill for highly selected patients. Nevertheless, it is technical challenging with a high conversion rate [4].

The definitive surgical treatment for gallstone ileus should be individualized after weighing a patient’s hemodynamic status, pre-morbid condition, intraoperative anatomical complexity, operating time, and experience level of the operating surgeon. The surgeon also needs to weigh against the risk of recurrence, biliary sepsis, and the potential for gallbladder carcinoma occurrence when deciding a surgical approach. A modified approach with a cholecystostomy, stone removal, and T-tube drainage may be a good bailout procedure.