Abstract
Backgrounds/Aims: Proximal splenorenal shunt (PSRS) is considered a one-time treatment for noncirrhotic portal hypertension (NCPH) to prevent recurrent upper gastrointestinal (UGI) hemorrhage and long-term complications. Long-term shunt patency is necessary to achieve these. The lie of the shunt is a contributing factor to early shunt thrombosis. We investigated the role of resection of the distal tail of pancreas (caudal pancreatectomy [CP]) in improving the lie of shunt and decreasing shunt thrombosis.
Methods: This was a retrospective cohort study of patients with NCPH who underwent PSRS between 2014–2020 in JIPMER, Puducherry, India. CP was performed in patients with a long tail of pancreas, with the tip of pancreatic tail extending up to splenic hilum on preoperative CT. Perioperative parameters and shunt patency rate of patients who underwent PSRS with CP (Group A) were compared with patients undergoing conventional PSRS (Group B). Statistical analysis was performed using the Mann–Whitney U test and χ2 test.
Results: Eighty four patients with NCPH underwent PSRS (extrahepatic portal vein obstruction = 39; noncirrhotic portal fibrosis = 45). Blood loss was lower (p = 0.002) and post-shunt fall in portal pressure higher (p = 0.002) in Group A. Shunt thrombosis rate was lower (p = 0.04) while rate of complete variceal regression (p = 0.03) and biochemical pancreatic leak (p = 0.01) were higher in Group A.There was no clinically relevant pancreatic fistula in either group.
Conclusions: CP is a safe and useful technique for reducing shunt thrombosis after PSRS in patients with NCPH by improving the lie of shunt.
Keywords : Caudal pancreatectomy; Noncirrhotic portal hypertension; Proximal splenorenal shunt; Lie of the shunt; Shunt thrombosis

Proximal splenorenal shunt (PSRS) is a commonly performed operative procedure for noncirrhotic portal hypertension (NCPH). It is considered a one-time treatment option to prevent upper gastrointestinal (UGI) hemorrhage from gastro-esophageal and ectopic varices. Shunt surgery also prevents long-term complications of portal hypertension such as portal biliopathy [1,2]. Long-term patency of the shunt is necessary to achieve the aforesaid objectives. Numerous factors have been reported to contribute to shunt thrombosis [3]. Amongst these, a proper lie of the splenic vein (SV) with respect to the left renal vein is a factor in the technical success of PSRS. Ours is a high-volume center for surgical treatment of portal hypertension [4,5]. We have observed that a long tail of pancreas impinged on the splenorenal anastomosis can result in kinking of the PSRS, thus altering its lie. Hence, we selectively performed resection of the distal-most portion of the tail of pancreas (caudal pancreatectomy [CP]) to increase the available length of the SV and improve the lie of the shunt.

This study focused on the role of CP in improving the lie of the shunt and in reducing the incidence of shunt thrombosis in patients with NCPH undergoing PSRS.

This was a retrospective cohort study of patients with NCPH who underwent PSRS between 2014–2020 in Jawaharlal Institute of Postgraduate Medical Education and Research (JIPMER), Puducherry, a tertiary care hospital and an Institute of National Importance in India. This study was approved by the Institute PG Research Monitoring and Ethics Committee (Ref No: JIP/IEC/2014/10/478 Registration Number of IEC: ECR/342/INST/PY/2013). All participants gave informed consent before inclusion in this study. Groups A and B comprised of patients who underwent CP with PSRS and conventional PSRS alone, respectively. Demographic, clinical, and endoscopic parameters of both groups were compared (Table 1).

Indications for shunt surgery in patients with NCPH have been previously reported [3,4]. Patients requiring shunt surgery were evaluated by UGI endoscopy, Doppler study of the porto-splenomesenteric system, Acoustic resonance forced impulse scan, and computed tomography (CT) portovenogram. The presence of a long tail of pancreas especially with the tip of the pancreatic tail extending up to the splenic hilum on pre-operative CT portovenogram (Fig. 1) was used as a criterion for selecting patients for CP. The coagulation workup for procoagulant disorders was not done for any patient due to logistic reasons. All patients received pneumococcal, meningococcal, and Haemophilus influenzae vaccines preoperatively. 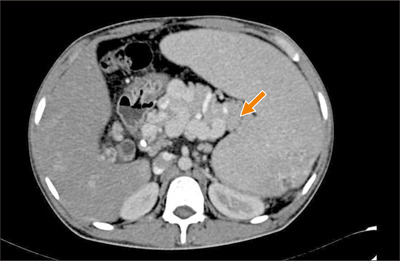 The technique of PSRS has been previously reported [2-4,6]. PSRS was performed through the left trap door incision with the patient in a supine position with slight elevation of the left flank. Splenic artery was identified at the upper border of the pancreas and ligated in continuity. Spleen was removed only after dissecting the SV completely and preserving adequate length of SV.

CP was performed in patients with a long tail of the pancreas, especially when the tip of the pancreatic tail extended up to the splenic hilum as seen in preoperative CT portovenogram (Fig. 1), and further assessed intraoperatively by the operating surgeon taking into consideration the effectiveness of CP in increasing the available length of the SV and eventually improving the lie of the shunt. In these patients, after performing splenectomy, approximately 2–3 cm of the pancreatic tail was resected using a laparoscopic linear cutter (Fig. 2) to increase the available length of the SV (Fig. 3). The stump of the pancreas was reinforced with 4-0 polypropylene sutures to secure hemostasis and to prevent pancreatic duct leak. Gerota’s fascia was dissected and the left kidney was exposed at the medial aspect. The left renal vein was identified and dissected out. The left gonadal vein was ligated and divided close to the left renal vein. The end of the SV was anastomosed with the side of the left renal vein in a continuous fashion using 5-0 or 6-0 Prolene. The lie of the shunt is related to the proper alignment of the SV, which is a mobile structure with respect to the left renal vein, a fixed structure. The most acceptable position is to align the midpoint of the anterior wall of the SV to the left corner of the cut edge of the left renal vein. This was very well achieved by removing the fixity of the SV to the tail of the pancreas. CP thus improved the lie of the shunt by removing this fixity of SV to the pancreatic tail and attaining the appropriate alignment as mentioned above. Once this acceptable position was attained, the lie was considered to be satisfactory (Fig. 4). 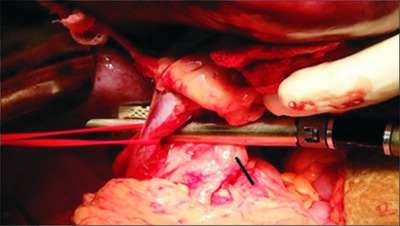 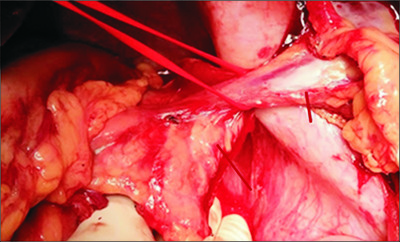 Fig 4. After caudal pancreatectomy and proximal splenorenal shunt, the satisfactory lie of the shunt. Black line shows the site of splenorenal anastomosis; arrow indicates the cut end of pancreas.

Drain fluid amylase was assessed routinely for all patients on postoperative day-3. Postoperative pancreatic fistula was defined and graded using the criteria recommended by the International Study Group of Pancreatic Surgery [7].

Histopathological examination of the SV wall was performed for all patients to assess pathological abnormalities in the SV [5].

Postoperatively, all patients received oral anticoagulants for two years. They were followed up at 1, 3, 6, 9, 12 months, and every six months thereafter for five years with prothrombin time, platelet count, UGI endoscopy, Doppler study of the porto-splenomesenteric system, and shunt. CT portovenogram was performed for patients in whom shunt thrombosis was suspected on Doppler evaluation. Shunt thrombosis rates at 3 years of follow-up were considered for comparison.

The majority of patients were females (n = 54, 64.2%). Median (range) age was 22 years (range, 12–55 years). Symptom duration was 108 months (range, 1–240 months). The most common presentation in both EHPVO and NCPF patients was UGI hemorrhage (89.3%). Clinical and demographic characteristics of the two groups did not differ significantly (Table 1). Hypersplenism was present in all 84 patients.

Table 2 . Intraoperative parameters in Group A and Group B 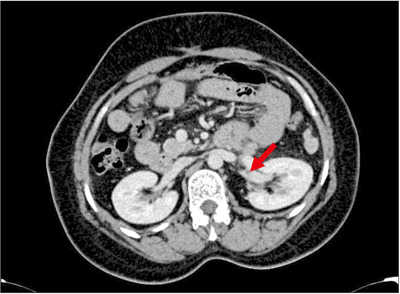 Table 3 . Postoperative parameters in Group A and Group B

The significance of possible confounding factors affecting shunt thrombosis is given in Table 4. SV of all patients in the study group was found to be pathological [5]. The technique of anastomosis and type of suture material was also the same in all patients. Therefore, these were not considered as confounding factors.

Overall, 65.5% (55/84) patients had complete regression of varices on UGI endoscopy while 34.5% (29/84) had a reduction in grade of varices. Complete variceal regression was higher in Group A (p = 0.03) (Table 3). Of the 29 patients with a reduction in grade of varices, 27 (Group A: Group B = 2 : 25) had shunt thrombosis while the remaining two patients (Group B) had patent shunts. All 84 had a correction of pancytopenia. None of the patients developed any features of endocrine or exocrine insufficiency during follow-up.

Shunt thrombosis is a common and important complication of PSRS reported in 5.6%–47.0% of patients [6,9,10]. Predisposing factors for thrombosis suggested in the literature [3,6,11-14] include a small diameter of SV and shunt, grade of esophageal varices at presentation, platelet count, an improper lie of the shunt, pathological abnormalities in SV, and the interval between shunt surgery and evaluation for thrombosis. In the early postoperative period, flow and size of vein, the technique of anastomosis, type of suture material, lie of the shunt, and presence of a pathological splenic venous wall can affect shunt thrombosis. In the late phase, underlying pro-coagulant disorder, post-splenectomy thrombocytosis, and decreased flow due to splenectomy are important predisposing factors for shunt thrombosis.

In our study, the difference in confounding factors affecting shunt thrombosis in patient groups with thrombosed versus patent shunt, namely diagnosis of EHPVO and NCPF, grade of esophageal varices at presentation, the diameter of SV and shunt, pathological SV, the technique of anastomosis, the type of suture material used, platelet count, and the interval between shunt surgery and evaluation for thrombosis were not significant (Table 4). Consequently, in this study, we focused on the lie of the shunt. 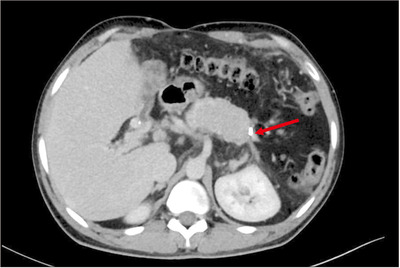 Mobilization of the SV for a length of 5 cm is usually done for all PSRS. This is enabled by serially ligating the small collaterals from SV to the pancreas. CP could facilitate this step and prevent occasional large blood losses observed in some patients who underwent conventional PSRS (Table 2). CP using a laparoscopic linear cutter is a relatively easy procedure because the vein and the pancreas are clamped and the pancreas is divided so that the bleeding is minimal. A comparison of the median and range of intraoperative blood loss between the two groups (Table 2) substantiated this assertion. Occasional large blood losses we experienced in Group B were avoided in Group A by CP.

Our results on postoperative pancreatic leak showed that the addition of CP to PSRS did not increase the morbidity of the procedure (Table 3).

Unshuntability of the SV has been proposed as a major reason for abandoning shunt during operation. One major reason is that injuries can inflict on the SV during its mobilization from the pancreas. In the presence of a diseased vein wall that occurs in all patients with NCPH [5], the atheromatous plaque area is a potential focus of tear in the vein. In many situations, SV is seen densely adherent to the pancreas. Hence, dissecting the vein out of the pancreas can result in small tears in the vein. The surgeon needs to put all efforts not to injure the pancreas to avoid pancreatic leaks. In patients with densely adherent SV to pancreas, it is easier to excise and remove the pancreas rather than resorting to meticulous dissection of both the SV and the pancreas thus risking tear in the vein. In our experience, addition of CP significantly contributed to the negligible unshuntability (with CP: 0/17; without CP: 2/69).

Limitations of the present study include the retrospective study design with inherent selection bias and a small number of patients who underwent CP. Of factors influencing shunt thrombosis, a workup for procoagulant disorders was not done. Notwithstanding these limitations, this is the first study to evaluate the role of CP in shunt patency in patients undergoing PSRS.

In conclusion, CP is a safe and useful technique for the reduction of the incidence of shunt thrombosis after PSRS in patients with NCPH, especially in those with a long pancreatic tail. This reduction is a consequence of achieving a satisfactory lie of the shunt.

The authors thank Dr. Bharath Konan of the Department of Surgical Gastroenterology, Jawaharlal Institute of Postgraduate Medical Education and Research (JIPMER), Puducherry for his support.