Abstract
Backgrounds/Aims: Pancreaticoduodenectomy (PD) is a standard surgical procedure for patients with periampullary cancer. During the follow-up period after PD, recurrence can be observed in various places with different prognosis. The aim of this study was to clarify the pattern of recurrence and factors affecting the survival of patients with periampullary cancer.
Methods: Overall, 88 patients who received PD for distal common bile duct cancer or ampulla of Vater cancer were finally included and their clinical characteristics were analyzed. Patients were divided into three groups: recurrence-free (RF) group, an isolated locoregional recurrence (LR) group, and a distant metastasis (DM) group. Prognostic factors affecting recurrence in each group were analyzed and a survival analysis was performed.
Results: Perineural invasion (PNI), T stage, and lymphovascular invasion (LVI) were significant risk factors for LR and PNI, lymph node metastasis, LVI, and T stage were associated with DM group compared to RF group in univariate analysis, respectively. N stage and PNI were significant risk factors (p = 0.046, p = 0.041) in overall survival of the LR and the DM groups. There was no significant difference in 5-year overall survival between the LR and DM groups.
Conclusions: T stage was a significant risk factor of LR, while PNI was a significant risk factor of DM. There was no significant difference in overall survival depending on the site of recurrence.
Keywords : Pancreaticoduodenectomy; Bile duct cancer; Recurrence; Metastasis

Periampullary cancer is a complex cancer that originates from adjacent structures. It can be treated with pancreaticoduodenectomy (PD) in resectable cases. However, clinical outcomes of these cancers are quite different. The recurrence rate is 28% to 42.5% in ampulla of Vater (AoV) cancers and 39% to 67% in distal common bile duct (CBD) cancers [1-6]. The 5-year survival of patients with AoV cancer is higher than that of those with distal CBD cancer [7-9].

This study was approved by the Institutional Review Board of Yeungnam Universtiy Hospital (approval no. 2021-08-002). A total of 200 patients who received PD between 2005 and 2015 because of neoplasms of periampullary cancer at a single center were identified in the hospital database. Patients who were diagnosed with duodenal cancer or pancreatic head tumors were not included in this study. Exclusion criteria were (1) patients who underwent palliative surgery, (2) patients with combined malignancy, (3) patients who were diagnosed with benign disease at the final pathological report, (4) those with postoperative mortality (30 days), and (5) those who had a follow-up loss. A total 88 patients with pathologically confirmed adenocarcinoma for distal CBD cancer and AoV cancer were retrospectively reviewed, including 48 with distal CBD cancer and 40 with AoV cancer. Demographic characteristics, clinical presentation before surgery, tumor marker (carcinoembryonic antigen [CEA], carbohydrate antigen 19-9 [CA19-9]), preoperative biliary drainage procedures, pathological findings, recurrent patterns, and survival data were collected and analyzed for these patients.

The routine extent of lymphadenectomy was similar to that described by International Study Group of Pancreatic Surgery (ISGPS) [10]. The basic surgical strategy for PD included resection of the bile duct as proximal as possible near the hilar level. Lymph node #12 was dissected when the right and left hepatic arteries were fully skeletonized. Lymph node #8 was retrieved as much as possible. Surrounding soft tissues were dissected to the right side of the superior mesenteric artery (SMA) and the celiac artery (CA).

Postoperatively, physical examination, blood tests including tumor markers, and abdominal computed tomography were performed every 3 to 6 months for the first five years. If tumor marker increased or radiologic examination revealed doubtful recurred tumor lesion, further evaluation including positron emission tomography/computed tomography (PET/CT) was considered to detect recurrence. Patients in this study were divided into three groups: a recurrence-free group (RF group), an isolated locoregional recurrence group (LR group), and a distant metastasis group (DM group). Locoregional recurrence was defined as recurrence limited to the extent of PD, whereas distant metastasis was considered when recurrence was found beyond the regional structures of the operation site. Images were reviewed by surgeons to identify the location of recurrence in this study.

The overall survival (OS) was defined as the interval between the date of surgery and the date of death. Survival status was determined based on data from the Ministry of Public Administration and Security, Korea.

Demographic and clinicopathologic factors of patients were collected and analyzed (Table 1). Among 88 patients, 48 patients underwent PD due to distal CBD cancer, while 40 patients underwent PD due to AoV cancer. The median age of patients at the time of surgery was 61 years. Seventy patients received preoperative biliary drainage for biliary decompression. With regard to T classification, 28, 16, 31, and 13 patients were classified as having T1, T2, T3, and T4 disease, respectively. Intraoperative lymph node positivity was noted in 38 patients. Well-, moderately-, and poorly-differentiated cells based on histological differentiation were noted in 14, 55, and 19 patients, respectively. Microscopic examination revealed perineural invasion in 43 patients and lymphovascular invasion in 58 patients.

Table 1 . Demographic and clinicopathologic factors of patients who underwent pancreaticoduodenectomy as primary treatment for periampullary cancer

During the follow-up period, 14 patients with locoregional recurrence, 32 patients with distant metastases, 42 patients without recurrence were found. When isolated LR and DM groups were compared, significantly higher rates of T stage, N stage, lymphovascular invasion, and perineural invasion were observed in the DM group. The medial value of preoperative CA19-9 was also higher in the DM group. Distal CBD cancer tended to metastasize to distant organs as compared to AoV cancer (p = 0.046). In addition, poorly differentiated cancers tended to be found in the DM group.

Table 2 . Site of recurrence at the first time of recognition

There was no significant difference in 5-year overall survival according to the recurrence pattern: 89.8% in the RF group, 21.4% in the LR group, and 15.6% in the DM group (Fig. 1). With regard to cancer type, patients with AoV cancer showed better survival than those with distal CBD cancer (Fig. 2). 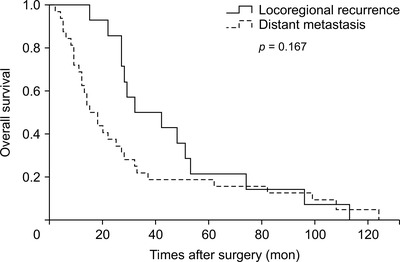 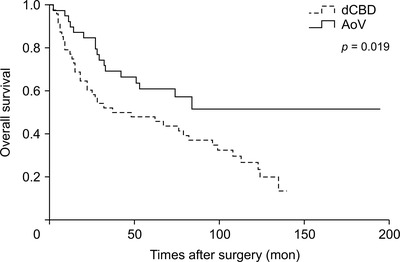 Several studies have investigated recurrence and prognostic factors of AoV cancer and distal CBD cancer. A number of studies have reported that patients with positive lymph node, lymphovascular invasion, perineural invasion, and higher medial value of CA19-9 have higher recurrence rates [1,2,4,7,11-14]. In this study, perineural invasion and lymphovasuclar invasion were significant risk factors of both LR and DM group. Positive lymph node was a significant risk factor of recurrence in the DM group in the present study.

Several studies have reported which node around the SMA (#14) as a common site of nodal metastasis [5,15-17]. Among five nodal recurrence cases of AoV cancer, two cases (40.0%) showed recurrence on the left side of the SMA. In the study of Kim et al. [5] 10 of 17 nodal (58.8%) recurrence cases showed recurrence located in the left side of the SMA. This outcome suggests that radical lymph node dissection that encircles the SMA should be performed in carefully selected patients with a high-risk of AoV cancer recurrence [5].

This study has some limitations. First, the present study was a single institutional study that included less than 100 cases. Therefore, further multi-institutional studies with larger sample sizes are required in the future. In the 8th edition of AJCC, primary tumor (T) staging was changed from the extent of tumor to the depth of invasion for staging of distal bile duct cancer [18]. As the pathological report in our study did not describe the depth of invasion in our center, we could not analyze the relation between T stage and other prognostic factors based on the AJCC 8th edition. As updated descriptions of pathological reports are available these days, further studies will be needed to support new staging systems. In addition, the standard regimens of chemotherapy for these cancers have not been established at that time. Since many patients in this study were not able to receive chemotherapy due to poor performance status, we could not investigate the relationship between the regimen of adjuvant chemotherapy and oncologic prognosis. Therefore, further studies of adjuvant therapies to reduce recurrence in high-risk patients are needed.

In conclusion, T stage was a significant risk factor of locoregional recurrence, while perineural invasion was a significant risk factor of distant metastasis. There was no significant difference in overall survival depending on the site of recurrence. While both distal CBD cancer and AoV cancer were treated by PD, AoV cancer had a tendency to recur near the SMA nodal lesion in this study. Therefore, more aggressive strategy to dissect near the SMA will be needed to reduce locoregional recurrence in patients with advanced AoV cancer.