Pancreatic cancer (PC) is one of the most lethal malignant diseases in gastrointestinal tract. Among the PC treatment options, surgical resection is the only potentially curative option. Unfortunately, resectable PC cases are less than 20%, at diagnosis and even most patients with resected PC experience recurrence, commonly in the liver, lung, and peritoneum, leading to high cancer-related mortality. However, with the introduction of potent chemotherapeutic agents, advancement of surgical technique, perioperative management, and easy access to medical check-ups, clinical situations seem to face a new paradigm.

A recent successful prospective randomized control study (RCT) comparing open distal pancreatectomy (DP) with laparoscopic distal pancreatectomy (LDP) has shown that LDP is a safe and effective surgical modality in treating left-sided pancreatic pathological conditions requiring surgical extirpation [1]. Although controversies are surrounding the use of LDP in managing left-sided PC [2], LDP has increasingly been demonstrated as a potential option for treating resectable PC [3].

In our institution, LDP has only been applied in well-selected left-sided PC, that fulfill the Yonsei criteria [4]. With the accumulating surgical experience and improved surgical techniques, we recently reported several cases of successful LDP in more advanced PC following neoadjuvant chemotherapy [5]. Herein, we report a case of LDP with celiac axis resection (LDP-CAR) in locally advanced pancreatic cancer (LAPC) following neoadjuvant chemotherapy. The oncologic role of advanced LDP is also discussed based on the currently published literature.

A 58-year-old female first visited a local hospital with abdominal pain that had lasted for a month. Abdominal and pelvic computed tomography (CT) showed pancreatic body cancer, and she was referred to our institution for further evaluation and treatment. She was taking anticoagulants for hypertension and had dyslipidemia, and anxiety disorders. She had no specific family history. Laboratory data revealed a mild elevation of amylase (145 U/L, normal rage 30–115 U/L). Tumor markers, including carcinoembryonic antigen (1.51 ng/mg), cancer antigen-19-9 (CA19-9; 21.1 U/mL) were within normal limits on the first visit in our institution.

A CT pancreas dynamic findings revealed a 24-mm mass in the pancreatic body without direct organ invasion and distant metastasis. But the celiac artery (CA), and common hepatic artery (CHA) showed abutment (Fig. 1A, 1C). There was no abutment with the superior mesenteric artery (SMA), superior mesenteric vein (SMV), and portal vein. Magnetic resonance cholangiopancreatography revealed a pancreas body mass of 2.4 cm with perivascular spread along the splenic artery (SA) and suspiciously to the lateral side of the CA. Pancreatic duct was not dilated or obstructed and there was no abuttment or encasement with SMA and SMV. Common bile duct was 0.9 cm (borderline dilation) and suspicious of chronic cholangiopathy. Endoscopic ultrasonography-guided fine needle aspiration cytology was performed, and pathological findings revealed a poorly differentiated pancreatic ductal adenocarcinoma (PDAC). Positron emission tomography–computed tomography findings did not show distant metastasis but showed mild uptake at the left para-aortic area, possibly metastasis. 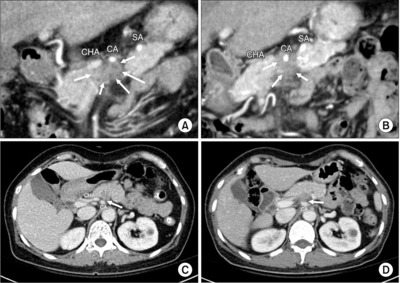 Based on these findings, the patient was diagnosed with LAPC. FORFIRINOX was given as biweekly neoadjuvant chemotherapy. At first, a full dose of the standard regimen was proposed (130 mg of Oxaliplatin, 306 mg of leucovorin, 275.4 mg of irinotecan, and a total of 2,446 mg of fluorouracil). Before the second dose of FOLFIRINOX, she developed neutropenia, which required skipping fluorouracil bolus. After 6 cycles of chemotherapy, the tumor size was slightly decreased (24 to 16 mm), but still abutting to CA. However, during the fourth additional chemotherapy cycle, although it was stable, the state of the tumor remained unchanged. And the patient’s neurotoxic symptoms worsened, so it was difficult to continue chemotherapy. The 75% dose reduction was done from the tenth cycle of chemotherapy and after a total of 14 chemotherapy cycles, the patient was hospitalized for surgery. A biliary CT just before the surgery revealed the same tumor size (16 mm), still abutting to CA (Fig. 1B, 1D), and there was no significantly enlarged lymph node in the abdomen. Without embolization of CHA, LDP-CAR was attempted on March 17th, 2021.

Intraoperative findings showed neither peritoneal seeding nor distant metastasis. The tumor invaded the SA originating from the CA, left gastric artery (LGA), and CHA. There was no invasion around the SMA and SMV.

First, the possibility of preserving SMA was confirmed by separating the tumor bottom from the SMA. After successfully preserving the SMA, the LGA, CHA, and intrapancreatic collateral artery were all separately isolated. Because the distance between the tumor and the LGA was within 10 mm, it was difficult to remove the tumor without cutting the LGA. Therefore, to confirm the possibility of combined CAR, we checked the liver and stomach perfusion after clamping all the LGA, CHA, and intrapancreatic collateral arteries (Fig. 2A). Intrahepatic artery pulsation was confirmed by intraoperative ultrasonography (IOUS) and there was no ischemic change in the stomach. 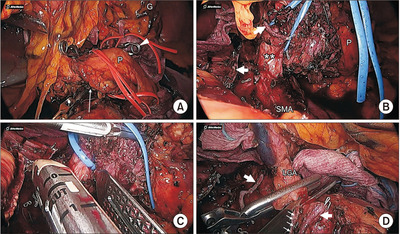 It was determined that resection seemed possible and the operation was performed. The neck of the pancreas was transected and the splenic vein was resected using a vascular stapler. For DP with splenectomy, all the ligaments around the pancreas and spleen were dissected. After checking where the SMA comes from the Aorta, the CA above it was dissected and isolated. Then, the LGA and CHA were resected and the CA was resected to the specimen side (Fig. 2B–2D). After the specimen was out (Fig. 3A), we confirmed gastric perfusion by indocyanine green (ICG) and hepatic perfusion by IOUS (Fig. 3B, 3C). The total operation time was 315 minutes, and blood loss was 350 mL. No intraoperative transfusion was provided. 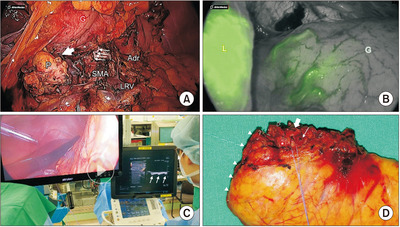 The patient received postoperative care in the ward. Transfusion was not performed. She recovered routinely without complications. On the sixth postoperative day, there was no specific finding in the abdomen on routine CT. Histopathological findings showed 1.6 × 1.4 × 1.2 cm residual PDAC, and poorly differentiated and 1/10 regional metastatic lymph node. The TNM classification (8th edition) was T1N1M0, stage IIb. All the resection margins including the CA was free from the tumor (Fig. 3D). After postoperative management, she recovered without complications and was discharged from the hospital nine days after surgery.

Since Appleby [6] reported multi-visceral resection for advanced gastric cancer, including en bloc gastrectomy, and distal pancreatosplenectomy with CAR, a modified version of this procedure has been applied in LAPC, as DP-CAR.

Yamamoto et al. [8] investigated the effectiveness of DP-CAR in LAPC following neoadjuvant treatment. They analyzed 72 patients (18.3%) with DP-CAR out of 395 patients with DP for PC. It found that the overall morbidity was significantly higher, but the median survival in patients with adjuvant chemotherapy demonstrated better survival outcomes than those in patients with R1-DP [8]. In addition, Klompmaker et al. [9] conducted a pan-European retrospective cohort study about the oncologic outcome of DP-CAR. They evaluated 69 patients with DP-CAR from 20 institutions in 12 countries and their results showed 53% R0 resection, 25% major morbidity, and 16% mortality with a comparable long-term survival outcome (median 18 months). These findings highlighted the importance of patients’ selection and surgical expertise [10]. Gong et al. [11] recently conducted a meta-analysis on the safety and effectiveness of DP-CAR based on 291 patients from 18 literatures. It was reported that DP-CAR was associated with longer operation time, greater intraoperative bleeding, high incidence of venous (33.28%), and arterial (11.53%) reconstruction; however, there was comparable morbidity, mortality, and R0 rate with similar long-term survival [11]. Therefore, they concluded that DP-CAR was feasible and acceptable in terms of its survival benefits, but it should be performed with caution due to its potential postoperative morbidity [11]. In fact, in the 2020 French recommendation for PC with vascular involvement, pancreatectomy with combined arterial resection was proposed for clinical setting following neoadjuvant treatment [12]. In addition, the Korean clinical practice guideline for PC 2021 suggested that if radical resection is possible in patients with PC invading the CA, DP-CAR could be considered [13].

Following issues need to be considered; “Who will be a candidate for DP-CAR?” DP-CAR is likely to be applicable when PC invades the origin of the SA, where the margin-negative standard DP cannot be performed. Considering the realistic clinical situation, DP-CAR can be a potential option when determining resectability after neoadjuvant chemotherapy for LAPC [14]. According to our present experience, safe and effective DP-CAR may be difficult in cases of cancer overt invasion in the CA and at least 1 to 2 cm cancer-free space should exist for resection of CA from the aorta, which is the same reason suggested in the Yonsei criteria [4].

Is preoperative arterial embolization required? When the CA is excised, since the collateral from SMA is responsible for liver perfusion and the remaining stomach via an inferior pancreaticoduodenal artery, gastroduodenal artery, and proper hepatic artery, it is necessary to preserve and confirm this arcade during DP-CAR. It is still controversial whether preoperative embolization is necessary. In fact, there seem to be many centers that perform DP-CAR without preoperative embolization. In this case, we omitted preoperative arterial embolization, but confirmed preserved hepatic arterial flow before performing DP-CAR. After clamping all the three potential arteries (intrapancreatic collateral vessel, CHA, and even LGA), well-perfused hepatic arterial flow could be detected in IOUS.

Is it safe to perform an LGA resection? Conventional DP-CAR includes the resection of LGA origin from CA. The resection of LGA will be determine by its location [15]. Modified DP-CAR is performed in patients with antecedent branching of LGA and the distance between the LGA and carcinoma is greater than 10 mm [15]. Modified DP-CAR is a method of excising CA while preserving LGA. In this case, the distance between the Tumor and LGA was close, to within 10mm, so conventional DP-CAR was performed.

A recent pooled analysis noted that ischemic gastropathy was 6%, and combined total gastrectomy was required in 11% of the patients [16]. Ischemia of the stomach due to decreased gastric blood can result in gastric ulcer and consequently gastric bleeding [16]. Therefore, care should be taken in managing LGA. In case of combined resection of LGA like in this case, arterial reconstruction should be considered based on intraoperative ICG perfusion. A recent study suggested an intraoperative ICG-based reconstruction strategy, and further study should be performed regarding this issue [17].

Finally, is Laparoscopic DP-CAR safe? To the best knowledge of the authors, it was Cho et al. [18] who reported the first experiences of LDP-CAR for distal PC, but there were some patients’ safety concerns. However, recently, there have been several laparoscopic and robotic DP-CAR studies [18,19]. In general, the question of which approach is better than the other is not important, the main focus should be a safe surgical technique that can achieve oncologic principles, and proper patients’ selection that enables the patients’ condition to be stable through chemotherapy, therefore, improving survival even after radically extended surgery [20].

In conclusion, according to the present case and the existing literature, LDP-CAR is feasible and safe. The role of DP-CAR will be highlighted in an era of potent chemotherapeutic agents. However, it should be carefully considered based on patient selection and surgical experiences. Further study is mandatory.