Abstract
Gallbladder paraganglioma (GP) is a rare tumor, with only 12 cases reported in the literature to date. Due to its rarity, clinical information of GP is insufficient. We present a case of GP in a 48-year-old female along with a literature review of all GP cases described to date. A 48-year-old female presented with intermittent right upper abdominal pain. Preoperative imaging revealed a hematoma in the gallbladder lumen without any definite etiology. Laparoscopic cholecystectomy was performed. Gross examination of the gallbladder revealed multiple small stones and a large hematoma as well as a 1.6-cm-sized polypoid mass at the gallbladder fundus. Microscopic study of the polypoid mass showed a zellballen appearance. Immunohistochemical analysis revealed that the mass was positive for synaptophysin, CD56, and chromogranin, suggesting GP. GP is difficult to diagnose because of non-specific clinical findings. Almost all GP cases are diagnosed based on histologic findings after cholecystectomy. Simple cholecystectomy was performed as a treatment in all reported cases of GP, including our case. There was no postoperative tumor recurrence or metastasis after surgery.
Keywords : Gallbladder; Paraganglioma; Cholecystitis; Hemorrhage; Cholecystectomy

Paraganglioma is a tumor that arises from the paraganglion. It can occur in various organs associated with sympathetic and parasympathetic nerves. Gallbladder paraganglioma (GP) is rare, with only 12 cases reported in the literature to date [1-11]. According to reported cases, GP usually presents non-specific symptoms such as abdominal pain owing to associated cholecystitis, although it does occasionally present symptoms of gastrointestinal bleeding [4]. Laboratory and imaging studies also present non-specific findings. Thus, most GP cases are diagnosed incidentally based on histopathological findings after cholecystectomy [10].

Because the disease is rare, clinical information about GP is insufficient. Herein, we describe a case of GP in a 48-year-old female along with a literature review of all GP cases described to date.

A 48-year-old female visited the hospital because of an intermittent abdominal pain that had occurred 3 to 4 months previously. She had no remarkable issues in her medical or family history. There were no abnormalities in her vital signs or physical examinations. All laboratory findings were within normal limits except that hemoglobin level was low at 9.0 g/dL (range, 12–18 g/dL). Tumor markers were within their normal ranges, CA19-9 level < 2.00 U/mL (range, 0–37 U/mL) and carcinoembryonic antigen level 0.82 ng/mL (range: 0–5 ng/mL).

Fig 1. Abdominal ultrasonography showing gallbladder distention (A) and an 8.0-cm × 5.0-cm sized heterogenous mass in the gallbladder lumen (arrow in B).

Fig 2. (A, B) Abdominal computed tomography showing an 8.7-cm × 5.3-cm sized uniformly contrasted mass (arrows) and calcification in the gallbladder.

Laparoscopic cholecystectomy was tried under the impression of gallbladder stone and hematoma due to unknown cause. There were no specific findings other than gallbladder distention during the operation. After removal of the gallbladder, gross examination revealed large amounts of hematomas and multiple small stones measuring less than 1 cm in the gallbladder lumen. Gallbladder wall was thickened and a 1.6-cm-sized polypoid lesion was detected at the gallbladder fundus (Fig. 4). The polypoid lesion was well demarcated with smooth margin suggesting a benign lesion. The operation was finished with the plan to identify the nature of the polypoid lesion through a biopsy later. Microscopy of the polypoid mass showed a zellballen appearance, wherein chief cells showed copious eosinophilic granules gathered to form cell groups separated by blood vessels and fibrous tissues. Immunohistochemical analysis showed that the mass was positive for synaptophysin, CD56, and chromogranin (Fig. 5). The polypoid mass of the gallbladder was confirmed as GP based on histopathological findings. The final diagnosis of the patient was GP with multiple gallbladder stones, chronic cholecystitis, and hemorrhage.

Fig 4. Surgical specimen of the gallbladder revealing a large intraluminal hematoma (A) and an approximately 1.6-cm-sized polypoid mass at the fundus (arrow in B). 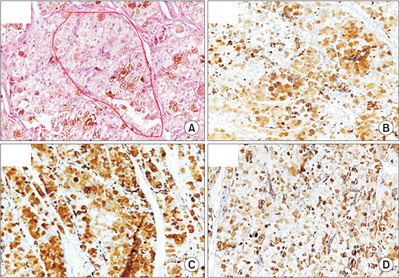 The patient had an uneventful recovery after the operation. Abdominal CT performed at six weeks after surgery showed non-specific findings without tumor recurrence.

Paraganglioma rarely occurs in the biliary system. Only 12 cases of GP have been reported in the literature so far. In 1972, Miller et al. [1] reported the first case of GP. The patient was a 67-year-old male who was admitted to the hospital mainly for recurrent hematemesis. Surgical findings revealed neoplastic bleeding in the gallbladder and cholecystoduodenal fistula. Cholecystectomy was performed [1]. In 1973, Wolff [2] reported about a patient with cholelithiasis and chronic cholecystitis who was diagnosed with GP based on histopathology following cholecystectomy. In 2000, Hirano [3] reported about a patient with GP who presented with right upper abdominal pain and a single gallbladder mass in an imaging examination, which was confirmed as GP after cholecystectomy. In 2001, Cho et al. [4] reported about a patient with right upper abdominal pain and surgical findings of a mass combined with bleeding in the gallbladder fundus. Mehra and Chung-Park [5] and D’John and Jabbar [10] each described patients presenting with abdominal pain who were diagnosed with GP after cholecystectomy.

Laboratory examinations and imaging studies such as abdominal US, CT, and MRI are usually unhelpful because GP presents no specific findings. According to a 2006 study by Lee et al. [15] on imaging examinations of extra-adrenal paraganglioma, the tumor appears similar to hemangioma on CT owing to its hyper-vascular characteristics. On MRI, particularly on T2-weighted imaging, the high and low signal intensity regions of the tumor repeatedly appear in a “salt and pepper” pattern. Nonetheless, GP might be difficult to diagnose if a hematoma owing to intraluminal bleeding is present, as in the present case. Therefore, almost all GP cases were diagnosed incidentally based on histopathological findings after cholecystectomy.

In terms of histologic findings, paraganglioma has unique features such as the presence of well-defined nests made up of round or polygonal epithelioid cells with a zellballen pattern in the tumor [5]. In immunohistochemical staining, paraganglioma is positive for chromogranin and synaptophysin, suggesting a neuroepithelial origin of the tumor.

In summary, GP is a rare tumor that is difficult to diagnose before surgery. It can be diagnosed based on histopathological findings after cholecystectomy. Simple cholecystectomy is suggested as an appropriate treatment for GP. However, further clinical studies with a large number of GPs are needed in the future.