Liver transplantation (LT) has been regarded as the only effective treatment for PFIC [5]. The estimated incidence rate of PFIC is 1 : 50,000 to 1 : 100,000 births [6]. The experience of LT for PFIC in Korea is very limited. Thus, the objective of this study was to investigate the clinicopathological features and posttransplant courses in seven pediatric LT recipients who were diagnosed with PFIC.

This was a retrospective single-center study on LT series in patients with PFIC. The LT database of our institution was searched to identify pediatric patients who underwent LT for PFIC from January 2013 to June 2020. All patients were followed up until April 2021 or death by reviewing institutional medical records with the assistance of the National Health Insurance Service in Korea. The study protocol was approved by the Institutional Review Board of our institution (No. 2020-0836). The requirement for informed consent was waived due to the retrospective nature of this study. This study was performed in accordance with the ethical guidelines of the World Medical Association Declaration of Helsinki 2013.

Clinical characteristics of seven patients with PFIC are presented in Table 1. Two patients (case no. 3 and no. 6) were diagnosed with PFIC type 1. The other five patients were diagnosed with PFIC type 2. Five were females and two were males. Age at PFIC onset was at birth in all seven patients. Five patients were Koreans and two were Arabians. Jaundice was present in all seven patients. Mean pretransplant total and direct bilirubin levels were 16.1 ± 8.1 mg/dL and 12.4 ± 6.2 mg/dL, respectively. Three of four patients showed high elevation of serum alpha-fetoprotein (AFP) levels.

The median patient age and body weight at LT were 10 months (range, 3–46 months) and 7 kg (range, 4.1–12.2 kg), respectively. Types of donors were mothers of patients in four and deceased donors in three. Two 3-month-old infant recipients received hyper-reduced left lateral section grafts, one from the mother (case no. 4) and the other one from a deceased donor (case no. 1) [8]. A 10-month-old patient underwent LT with a whole liver graft recovered from an infant donor (case no. 6) [9]. The remaining five patients received left lateral section grafts. Mean graft-to-recipient weight ratio was 3.6% ± 1.1%. Peritransplant imaging findings are individually presented in Fig. 1, matching with the case no. Standardized surgical techniques for pediatric LT were used for implantation of left lateral section grafts. 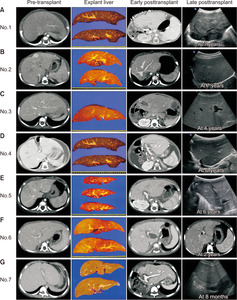 One patient who showed multiple high-enhancement masses in the liver revealed multiple hemangiomas and two small hepatocellular carcinomas (HCCs) (case no. 2). The patient did not show tumor recurrence for 91 months to date. Overall graft and patient survival rates in these seven patients at 5 years were 66.7% and 83.3%, respectively (Fig. 3).

LT has been accepted as the only effective treatment for PFIC patients with end-stage liver disease. Indications for LT include severe pruritus, significant growth retardation, liver cirrhosis, and liver failure. In the present study, occurrence of progressive liver failure combined with genetic mutation analysis findings was an indication of LT because the clinical course of PFIC is fatal. PFIC patients usually have growth retardation and metabolic bone disease mainly due to impaired vitamin D and calcium absorption caused by reduced bile secretion. Growth retardation is significantly improved after LT [11,12]. Although PFIC is a well-known disease worldwide, there are only a few case reports and a small case series on PFIC in Korean patients [7,10].

Although identification of a mutation in an associated gene is not mandatory for diagnosis of PFIC, it is an important diagnostic tool [13]. PFIC is a heterogeneous group of liver diseases, although laboratory findings, such as low serum γ-glutamyl transpeptidase despite direct hyperbilirubinemia, are similar in PFIC type 1 and type 2 patients [7]. These findings implicate that hyperbilirubinemia in PFIC is associated with bile excretion by the hepatocytes. On the contrary, common forms of neonatal cholestasis are characterized by increased γ-glutamyl transpeptidase usually due to damaged bile ducts caused by detergent effect of bile salts [14,15].

The majority of point mutations in PFIC type 1 and type 2 are missense, nonsense, and splicing mutations. Structurally abnormal proteins in PFIC type 1 are due to frame shift, splice site, nonsense mutations, and large genomic deletion. Heterozygous mutations have been associated with good prognosis and low penetrance in PFIC [17]. ABCB11 mutations were not detected in two patients with PFIC type 2 in the present study. Less than 10% of PFIC patients have no or monoallelic mutations. Mutations in these patients might be present in regulatory domains, untranslated regions, and introns that cannot be tested by present assessment methods [18]. Despite the absence of mutations or the presence of a single heterozygous ABCB11 mutation, the diagnostic sensitivity of clinical and pathologic findings with negative BSEP immunostaining is approximately 90% [19]. Therefore, absence of ABCB11 mutations cannot exclude PFIC type 2.

Although PFIC is known as an autosomal recessive hereditary disease, four of the seven PFIC cases underwent living donor LT in the present study primarily because of a relatively low incidence of deceased donors in Korea. For allocating split LT, PFIC patients have disadvantages due to low pediatric end-stage liver disease scores in comparison with biliary atresia patients. Some patients had to undergo LT at very young infancy, which made size-matched allocation of a split liver organ more difficult. These were the background reasons why two Korean patients underwent living donor LT. In addition, two of living donor LT cases were international cases, thus they were not allowed for deceased donor LT unless they lived more than one year in Korea.

Ursodeoxycholic acid is considered an initial treatment for patients with PFIC [20]. It can alleviate symptoms in PFIC type 1 patients. However, PFIC type 2 patients generally respond to ursodeoxycholic acid poorly, suggesting that this agent has uncertain effects on the progression of liver disease [21]. LT is the most efficient and the last therapeutic option in patients presenting with liver failure [22,23]. Selection criteria for LT candidates do not differ from those for patients with other liver diseases. Major indications for LT include end-stage liver disease, concurrent HCC, and intractable pruritus with no response to biliary diversion. Although LT can result in remission in 75% to 100% of patients, regardless of PFIC type, specific complications and relapse of disease should be carefully considered prior to LT [11,23,24].

HCC is a very rare disease in infant patients and most HCCs arise in the setting of prior liver disease HCCs [26]. They might be diagnosed incidentally in the explant liver or detected during surveillance of underlying disease. Interestingly, three of four patients who underwent AFP test in the present study showed high elevation of AFP levels before LT. Of them, one patient showed two incidentally detected small HCC masses at the explant liver [27]. We did not take account the possibility of HCC at the time of LT operation because multiple hepatic tumors were considered as infantile hemangioendothelioma. HCC is rarely diagnosed in infant patients with biliary atresia or other disease-associated liver cirrhosis [28-31].

This study has some limitations. First, this study was a small series from a single center. Thus, nationwide or international studies are necessary. Second, gene analysis in this study was not completely conducted. The association between AFP and PFIC needs to be assessed because of the absence of such information in the literature.

In conclusion, LT is currently the only effective treatment for PFIC-associated end-stage liver diseases. However, relapse of disease and other complications including steatohepatitis can occur after LT. Thus, it is mandatory to perform regular posttransplant follow-up, especially for patients with FPIC type 1.