Abstract
Backgrounds/Aims: This study aimed to evaluate clinical application of InnoSEAL Plus (a mussel-inspired catecholamine hemostat) as a new hemostatic material for humans.
Methods: Patients treated with topical hemostatic patches after liver resection were enrolled. They were divided into an experimental group (InnoSEAL Plus group) and two control groups (TachoSil® group and Surgicel Fibrillar® group) for efficacy evaluation.
Results: A total of 15 patients were enrolled. Each group had five patients. The 3-minute hemostasis success rate was 80.0% (4/5 patients) in the InnoSEAL Plus group, 80.0% (4/5 patients) in the TachoSil® group, and 40.0% (2/5 patients) in the Surgicel Fibrillar® group, showing no significant difference in the success rate among these groups (p > 0.05). All three groups exhibited 100% success rate for 10-minute hemostasis. Both InnoSEAL Plus and TachoSil® groups had one patient developing adverse events, which were treated easily with drug administrations.
Conclusions: InnoSEAL Plus is expected to be functionally not inferior to other conventional hemostatic agents. However, it is necessary to confirm this through multicenter prospective studies in the future.
Keywords : Pilot study; Hemostatics; Hepatectomy; Mussel adhesion

Advances in surgical technique have reduced the operative mortality and morbidity following liver resection. Although the mortality rate has decreased to be < 5%, morbidity rate of up to 40% is still reported [1]. In addition, postoperative bleeding and bile leakage remain challenging complications. They might lead to transfusion and prolonged hospitalization for patients who have undergone a liver resection [2]. Technical advances for the management of these complications include diathermy, argon beam coagulation, suture, clipping, hepatic inflow occlusion, and vascular occlusion. Topical agents including collagen fleeces, bovine collagen-based composite mixed with autologous plasma, and fibrin sealants have also been developed as supporting measures to prevent these problems [3-5].

Topical agents may help reduce postoperative bleeding and bile leak through effective sealing of vessel perforations and biliary radicals. Therefore, these agents are important in hepatic surgery. Recently, numerous mussel-inspired biomaterials have been developed as tissue adhesives, hydrogels for drug depots, hemostats, and surface-functionalizing polymers. In particular, a new class of adhesive hemostats for arresting bleeding has been reported [6-16].

Our previous study has used catechol-conjugated chitosan (CHI-C) as a hemostatic material to demonstrate cathechol-cation synergy (hemostatic ability of a CHI-C sponge in a heparinized rabbit model of femoral artery bleeding and a pig model of traumatic blunt liver injury with hemodilutional and hypothermic coagulopathy) [17]. We hypothesized that the use of chitosan-catechol might exhibit a superior medical sealant function focusing on adhesive hemostatic materials and that the sealing function might act as fibrin like functions even if hemostatic materials contains no fibrins. InnoSEAL Plus is the first-kind this type of device without fibrin yet exhibiting equivalent hemostatic capability. Well-designed and accurately executed good research is needed to produce high-quality results. To that end, it is very helpful to review the feasibility of a main study prior to performing it.

Thus, the aim of this pilot study was to recruit research participants and evaluate the feasibility of research of using InnoSEAL Plus (InnoTherapy, Seoul, Korea), a mussel-inspired catecholamine hemostat, for human patients.

We conducted a single-center, controlled, single-blind, and exploratory clinical study on early hemostatic efficacy and safety of InnoSEAL Plus. To approve clinical trials, all necessary toxicity tests including ISO-10993 (ISO 10993-5, cytotoxicity; ISO 10993-6, histopathological test; ISO 10993-10, intracutanenous reactivity and skin sensitization; and ISO 10993-11, acute toxicity and subchronic toxicity) were passed. The clinical study was designed as a comparative study with TachoSil® (Nycomed, Cophenhagen, Denmark) and Surgicel Fibrillar® (Ethicon, Somerville, NJ, USA). Adult patients (age > 18 years) indicated for elective liver resection for any reason (e.g., hepatocellular carcinoma, intrahepatic cholangiocarcinoma, intrahepatic duct stone, and metastatic liver disease) were eligible. Those who had a failure of first-line coagulation therapy (including diathermy, argon beam coagulation, suture, and clipping), liver cirrhosis with portal hypertension or above Child-Pugh B, those who underwent emergency hepatic resection, and those who had hypersensitivity to chito acid were excluded. This pilot study was approved by the Institutional Review Board (IRB) at Pusan National University Hospital Clinical Trial Center (IRB number: 1604-007-040). All patients provided written informed consent prior to study participation.

After liver resection, first-line coagulation therapy, including diathermy, argon beam coagulation, suture, and clipping, was performed. When the surgeon determined that hemostasis was achieved, the liver surface was compressed with a dry gauze for 1 minute for confirmation. If bleeding from exposed vessel was seen, coagulation therapy was repeated to achieve complete hemostasis. Following this process after controlling active bleeding, each patch product was applied at the liver cut surface. When major liver resection was performed, two patches and a single layer were usually applied. However, the number of patches and layers depended on the severity and the extent of operative lesion. Patches were compressed with a wet gauze for 30 seconds.

The safety of InnoSEAL Plus was evaluated throughout the study period. Patients were admitted for at least 7 days after surgery for evaluation. The final evaluation was conducted on the 30th postoperative day. Computed tomography (CT) was used to identify ascites, bilomas, and other abnormal fluid collections at postoperative day 5.

An adverse event was defined as any undesirable clinical change, whether or not the condition was not detected before surgery. This event was reported using systemic organ class and preferred term under MedDRA (version 19.0; ICH, Geneva, Switzerland).

As this study was an exploratory study, adjustment for multiple comparisons was not made. Statistical significance was judged based on a bilateral significance of 0.05. All statistical analyses were performed using SAS program version 9.3 (SAS Institute, Cary, NC, USA).

Of 20 patients eligible for this study, five were excluded, leaving 15 patients for the trial. These patients were divided equally into the InnoSEAL Plus group (n = 5), the TachoSil® group (n = 5), and the Surgicel Fibrillar® group (n = 5) (Fig. 1). 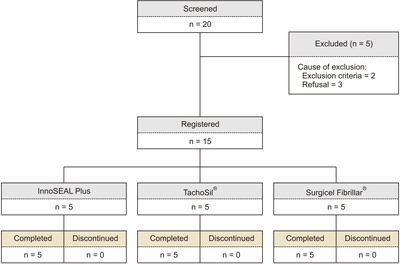 The mean age of the overall cohort was 64.20 ± 8.65 years. The number of male patients in the InnoSEAL Plus was low at 40%. The mean age was higher in InnoSEAL Plus (70.60 ± 6.84 years). However, there was no statistical difference in sex distribution or mean age between groups. Major (> 3 segments) and minor (< 3 segments) resection were performed for 7 and 8 patients, respectively. Causes of liver resection were hepatocellular carcinoma (n = 8 cases), metastasis (n = 3), intrahepatic cholangiocarcinoma (n = 1), gallbladder cancer (n = 1), intraductal papillary biliary neoplasm (n = 1), and hepatolithiasis (n = 1). Clinical data of these 15 patients are shown in Table 1.

Regarding hemostatic time, the time to hemostasis in the InnoSEAL Plus group was shorter than that in the TachoSil® group or the Surgicel Fibrillar® group (2.80 ± 1.10 minutes vs. 3.00 ± 1.87 minutes or 4.80 ± 2.59 minutes). However, difference between groups was not statistically significant (p > 0.05) (Table 2). Regarding the 3-minute hemostasis success rate, the InnoSEAL Plus group and TachoSil® group both achieved 80.0% (4/5), while it was lower in the Surgicel Fibrillar® group at 40.0% (2/5). However, the 3-minute hemostasis success rate was not significantly different between groups (p > 0.05). For the 10-minute hemostasis success rate, a 100% rate was achieved for all three groups. No re-bleeding occurred in any of the three groups (Table 2).

Table 2 . Hemostasis time and success rates at 3 minutes and 10 minutes and re-bleeding rates

Procedural pain, abnormal hepatic function, disorders of respiratory gas exchange, and pyrexia known to be common in liver resection occurred in > 50% of patients. In terms of serious adverse events, one (20.0%) patient in the InnoSEAL Plus group developed 7 adverse events (namely body fluid imbalance and peripheral edema, ear edema and external ear pain, and hypotony maculopathy and scleritis) at 4, 5, and 6 days after application of InnoSEAL Plus. In this situation, there were no abnormal findings for allergy reaction test associated with InnoSEAL Plus. All these were treated with drug administration. Meanwhile, one (20.0%) patient in the TachoSil® group developed three adverse events. No case of adverse events causing dropout or death occurred during the trial.

All patients underwent abdominal CT. There was no evidence of re-bleeding, bilomas, or abnormal fluid collection. Additional treatment was not required for bile leak or other resectional surface-related complications. Despite a high frequency of adverse events, no serious adverse event caused death study drop out. Moreover, the most frequent adverse events were those commonly occurring in liver resection. Only one patient in the InnoSEAL Plus group developed a serious adverse event. All adverse events were considered to be either unrelated or unlikely to be related to InnoSEAL Plus treatment. All patients recovered without additional treatment or complication.

Bleeding is a leading cause of intra- and post-operative morbidity and mortality. Although various hemostats have been developed, arresting perioperative bleeding remains a challenge [18]. Effective hemostasis is essential in surgery. No surgery can be finished unless complete hemostasis is accomplished. Advances in biomaterials have led to the discovery of various topical hemostatic agents, which are primarily classified as biologically active and passive hemostatic materials [19,20]. Fibrin glues are the most commonly used active hemostats. They contain physiologically active thrombin and fibrinogen. However, fibrin glues have a latent risk of viral contamination (i.e., HIV and hepatitis A, B, and C) and prion disease transmission [19-21]. Importantly, fibrin glues are not effective against massive, high-pressure bleeding due to their poor tissue adhesion and weak cohesive strength [21-23]. Although passive hemostatic materials such as collagen, gelatin, glutaraldehyde-albumin, cyanoacrylate, and oxidized cellulose do not contain active coagulation factors, they can indirectly cause platelet activations and aggregations [24,25]. Previous studies have shown that collagen-, gelatin-, and oxidized cellulose-based hemostats have poor performances and often led to re-bleeding that require reoperations [24,25]. Meanwhile, concerns about significant tissue toxicity from degraded byproducts and exothermal polymerizations have been raised for cyanoacrylates and semi-synthetic-like glutaraldehyde-albumin sealants [19-21].

Numerous mussel-inspired biomaterials such as hyaluronic acid-catechol, multi-armed poly(ethylene glycol)-catechol, dextran-catechol, alginate-catechol, heparin-catechol, and poly(ethylenimine)-catechol have been recently developed [6-12]. In general, mussel-inspired adhesive biomaterials are multifunctional in that they can be used as tissue adhesives, hydrogels for drug depots, hemostats, and surface-functionalizing polymers. In particular, a new class of adhesive hemostats for arresting bleeding has been reported, including catechol-functionalized chitosan/pluronic hydrogels, poly(organophophazene)-catechol, polyethylene glycol-citric acid-catechol, and gelatin-catechol [13-16]. Unique characteristics of these materials are that they simultaneously show both hemostatic and tissue sealing properties. They show excellent hemostatic capability by strengthening polymer network structures and adhesiveness to tissues. However, whether mussel-inspired catecholamine can arrest bleeding after hepatic resection has never been reported.

In this study, mussel-inspired catecholamine was compared with two different commercial products. Results showed no significant difference in hemostatic time, success rate, or re-bleeding rate between the mussel-inspired catecholamine and commercial products. All data for this pilot study of InnoSEAL Plus were handled by a Ministry of Food and Drug Safety reviewer. The initial hemostasis success time was set as 3 minutes in this study based on previous studies showing a mean hemostatic time of 2.5–4.7 minutes [4,26,27]. In addition, to confirm hemostasis, the operation was terminated after waiting for an additional 10 minutes and verifying no bleeding. There were no significant differences in the hemostatic time between the experimental group and control groups.

This pilot study is a preliminary study conducted to evaluate the validity of the main study to be officially started. Through this study, the authors obtained the basis for performing a full randomized clinical study. In conclusion, this pilot study showed that InnoSEAL Plus, a chitosan-catechol conjugate, might be useful as a hemostatic material for liver resection. Results of this study warrant further multicenter prospective studies.