Abstract
Drug reaction with eosinophilia and systemic symptoms (DRESS) syndrome is a rare delayed-type hypersensitivity reaction that causes skin abnormalities and mucosal involvement of the entire body. This is a case report of DRESS occurring in a liver transplantation recipient after taking drugs. A 57-year-old female patient with hepatocellular carcinoma underwent living donor liver transplantation in April 2019. She had no previous medical histories relevant to allergic diseases. There were no adverse events during hospitalization. She was admitted to evaluate and treat a headache occurring at one month after transplantation. However, she suffered from adverse drug reactions after taking anticonvulsants, showing skin rash, itching sense, and fever with eosinophilia. Piperacillin/Tazoperan was administered for ten days as an empirical antibiotic. Skin biopsy was performed on postoperative day 106 for erythematous maculopapular rash in the arms, legs, and torso. Her symptoms improved after discontinuation of the suspected medication with conservative skin treatment and high-dose steroid treatment. This case suggests that suspicion of drug history is essential for early diagnosis and management of DRESS.
Keywords : Drug hypersensitivity; Eosinophilia; Liver transplantation; Severe cutaneous adverse reaction

Severe cutaneous adverse reaction (SCAR) can have a fatal progression in various organs after drug administration, including Steven-Johnson syndrome (SJS), toxic epidermal necrolysis (TEN), and drug reaction with eosinophilia and systemic symptoms (DRESS). SJS and TEN are delayed-type hypersensitivity reactions that shows skin abnormalities from several days to 4 weeks after administering causative agents. As usual, skin symptoms appear several hours to several days before other symptoms such as fever, malaise, and discomfort in eyes or throat appear [1,2]. DRESS is another delayed-type hypersensitivity reaction. In addition to skin rash, it shows systematic symptoms such as organ involvement, eosinophilia, lymphadenopathy, and high fever [2]. Similar to SJS and TEN, patients with DRESS experience prodromal symptoms. However, its incubation period is relatively more extended from two weeks to two months. In addition, 20% of patients show relapse after recovery from the acute course. Furthermore, DRESS is positively associated with reactivation of latent infection of human herpes virus (HHV), cytomegalovirus (CMV), and epstein-barr virus (EBV) [3,4]. It is sometimes difficult to accurately diagnose DRESS syndrome because its clinical features are similar to those of graft-versus-host disease (GVHD), making it difficult to determine the direction of treatment.

There is a case report about a rare SCAR in Korea occurring in a liver transplant recipient experiencing DRESS syndrome after multiple medications, including anticonvulsants, immunosuppressants, and antibiotics.

A 57-year-old female hepatocellular carcinoma patient underwent liver transplantation from a living donor on April 15, 2019. She had no previous medical histories relevant to allergic diseases. There were no adverse events during hospitalization. She was discharged on a postoperative day (POD) 25 and readmitted because of a fever up to 38.4°C and a headache on POD 25. Based on results of neurological examination and spinal tapping, treatment was started under suspicion of viral meningitis. For persistent neuropathic pain, carbamazepine was prescribed by a neurologist from POD 32 to POD 40. She complained of drug rashes starting from hands and feet on POD 34. There were erythematous macular patches on the trunk and extremities, especially on the palmoplantar area. Laboratory findings were: white blood cell, 4,190/μL; hemoglobin, 8.2 g/dL; platelet, 89,000/μL; eosinophil, 0%; and lymphocyte, 18.4%. The drug was discontinued on POD 41 due to suspicion of drug rash caused by carbamazepine. From POD 41, she started taking trimethoprim-sulfamethoxazole (TMP-SMX) as a prophylaxis for Pneumocystis pneumonia (PCP) (Fig. 1).

She suffered from diarrhea, skin rash, and itching sense on POD 99. There was a fever over 39°C. From POD 105, piperacillin/tazoperan was administered for ten days as an empirical antibiotic for cholangitis after liver transplantation. Skin biopsy was performed on POD 106 for erythematous maculopapular rash in the arms, legs, and torso. Acute GVHD was confirmed in the biopsy (Fig. 2A). She stopped taking Tacrolimus from POD 109. Steroid dosage was increased on POD 108 as we could not rule out Tacrolimus as the cause of skin problems. Concerning that piperacillin/tazoperan might lead to eosinophilia, drug rash, and drug fever, we changed Piperacillin/Tazoperan into Levofloxacin after ten days.

A liver biopsy was performed. There was no evidence of GVHD. However, acute hepatitis with reactive hemophagocytosis due to acute viral infection and drug/toxin-induced liver injury were observed (Fig. 2B). The rash and itching sense of the trunk were exacerbated from POD 117. The rash was a generalized maculopapular rash that started from the neck and spread from the center to the peripheral. Oral mucositis and multiple ulcerative lesions in the oral cavity appeared. There were tingling, tearing, swelling around the eyes, hyperemia, blepharitis, and dry eyes. We suspected ocular GVHD Grade 1. Thus, steroid pulse therapy was done from POD 119. We retrospectively reviewed the clinical course of this patient and suspected DRESS syndrome due to several medications. TMP-SMX was discontinued on POD 119 and tenofovir was discontinued on POD 121. Skin biopsy was retaken on POD 121 due to itching sense, multiple bullae on both dorsum of the hand, both sole, and bullous pemphigoid. The biopsy result was drug eruption with superficial perivascular lymphocytic infiltration.

Afterward, most skin lesions in the torso (Fig. 3A) and limbs improved (Fig. 3B). However, skin detachment of the abdomen and hands progressed further and onycholysis of nails appeared (Fig. 3C). Multiple ulcerative lesions appeared over the near-total palate, lip, and buccal mucosa (Fig. 3A, 3D, 3E). There were erosions of the vulva and perianal areas (Fig. 3F). On POD 224, we suspected PCP pneumonia because of fever and diffuse ground-glass opacity pattern on chest computed tomography. Clindamycin and primaquine were administered for three weeks. On POD 242, tenofovir was resumed as she was a hepatitis B virus carrier. After three days, urticaria, severe pruritus, erythema, and edema occurred. These symptoms disappeared after drug cessation. There was no further occurrence after follow-up for four months. 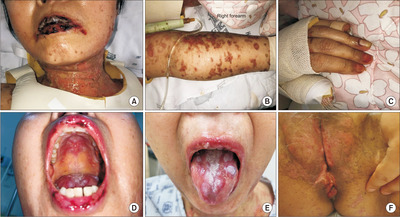 There is no specific test method for SCAR. Its diagnosis is mainly based on clinical features. Differential diagnosis of DRESS from other drug eruptions depends on skin involvement and specific symptoms such as organ involvement, lymphadenopathy, and eosinophilia [5]. In order to diagnose DRESS, the RegiSCAR group and the Japanese consensus group have proposed some criteria. Although there are only a few differences in these criteria, the criteria porposed by the Japanese consensus group are more strict overall than those proposed by the RegiSCAR group. In the criteria proposed by the Japanese consensus group, DRESS corresponds to drug-induced hypersensitivity syndrome (DiHS). The RegiSCAR group has suggested a scoring system to validate DRESS. The list is composed of major clinical characteristics of DRESS. By scoring each criterion from -1 point to +2 points, we calculate the total score. Diagnosis of DRESS is made based on the total score: < 2, no case; 2–3 points, possible case; 4–5 points, probable case; > 5 points, definite case [6].

In our patient, on postoperative 34 days, the first symptom appeared. According to the RegiSCAR scoring system, the total score was 4, satisfying a probable case of DRESS. However, our case only met three of seven criteria of the Japanese consensus group, not satisfying DiHS.

On postoperative 117 days, our patient suffered from a relapse of symptoms, including ocular involvement. According to the RegiSCAR scoring system, the total score was 5, following the probable case of DRESS. In addition, five of seven criteria of the Japanese consensus group criteria were met, satisfying DiHS.

In this case, the patient has an HLA-B*15:02 positive allele, corresponding to the association mentioned above with carbamazepine. Multiple drugs were administered in this patient. However, the possibility of carbamazepine as the cause was high relative to other medications. We had a lot of difficulties in the diagnosis. Initially, her clinical features were similar to those of acute GVHD and eosinophilia was considered a secondary finding based on antibiotics. However, despite an appropriate treatment, her skin lesions became more severe and her clinical features were inconsistent with biopsy findings. We were finally able to diagnose and treat DRESS syndrome through a detailed retrospective review of the carbamazepine use history, HLA type favorable for DRESS syndrome, eosinophilia, and the patient’s clinical course. Eosinophilia was not confirmed at the time of the initial skin lesion occurrence. It showed increasing findings upon continuous follow-up. If we initially suspected that eosinophilia was a symptom of SCAR rather than a secondary result of antibiotic treatment, it would have been easier to diagnose and treat her DRESS syndrome.

DRESS syndrome is mainly managed by symptomatic treatment. Above all, it is imperative to stop suspected medications based on detailed medical history immediately. In comparison with SJS and TEN, organ involvement is the main problem of DRESS syndrome. Therefore, systemic steroid administration is imperative and effective. IVIG is not recommended routinely [12]. However, IVIG is known to be effective in lowering the hyperactive inflammatory response [13]. In our patient, skin rash and various symptoms due to persistently hyperstimulated immune reactions appeared. The effect was insignificant even when high-dose steroids were used. We used IVIG in an attempt to reduce non-specific inflammatory reactions. Our experience of this case suggests that early diagnosis of DRESS followed by timely management can lead to favorable outcomes.

In conclusion, we report a rare case of DRESS in a liver transplantation recipient. Suspicion of DRESS syndrome through signs and symptoms is essential. Early diagnosis can lead to successful treatment, thus preventing further infection and multi-organ failure.