Abstract
Germ cell tumors (GCTs) are considered as extragonadal if there is no evidence of a primary tumor in the testes or ovaries. GCTs can be classified as seminomas, non-seminomatous, mature teratomas, and immature teratomas based upon histology. Mature teratomas are generally found in prepuberal children. Less than 1% of them have been reported in the gastrointestinal tract and liver. Liver teratomas are extremely rare. There are only 11 cases reported in adults up to 2018. Isolated liver metastasis of ovarian teratoma is also very rare. We present a case of a late metachronous recurrence of liver cystic teratoma with gliosis peritonei in a female adult treated by a right extended hepatectomy along with a literature review.
Keywords : Teratoma; Hepatectomy; Gliosis; Neoplasms; Germ cells and embryonal

Germ cell tumors (GCTs) are considered as extragonadal if there is no evidence of a primary tumor in the testes or ovaries. Extragonadal GCTs typically arise in midline locations. Their specific sites vary with age. In adults, the most common sites in order of frequency are the anterior mediastinum, the retroperitoneum, and the pineal and suprasellar regions. In infants and young children, sacrococcygeal area and intra cranial GCTs are the most common [1].

Extragonadal GCTs can be classified as seminomas, non- seminomatous, mature teratomas, and immature teratomas based upon histology. By definition, teratomas derived from at least two of the three embryonic cell layers: ectoderm, mesoderm, and endoderm [2]. They may be classified as benign or malignant based upon their histological features and cellular mitosis [3]. Teratomas develop more commonly in the ovaries and testes than in the anterior mediastinum, retroperitoneum, sacrococcygeal region, or the skull [4]. Less than 1% of cases have been reported in the gastrointestinal tract and liver. Those reported have been more commonly liver teratomas (LTs) that arise from a GCT of the retroperitoneum that involves the liver. LTs are extremely rare. There are only 11 cases reported in adult population until 2018. Isolated liver metastasis of ovarian teratoma is also very rare.

We present a case of a late metachronous recurrence of liver cystic teratoma with gliosis peritonei in a female adult treated by a right extended hepatectomy, along with a literature review.

In August of 2018, a 29-year-old female was referred to our department, Surgical Oncology, Soft Tissue, Bone Tumors and Digestive Tract Tumors, with right upper pain for ten months without other related symptoms. Her past medical history included a left salpingoophorectomy in 1998 due to a mature cyst teratoma without other related management. Physical examination revealed a normal abdomen without a palpable mass. Biochemical studies revealed no alterations for oncological serum markers: alfa-fetoprotein of 1.9 ng/mL, CA19-9 of 1,946 ng/mL, and CA125 of 154 ng/mL. A computed tomography (CT) was performed which revealed a liver mass that involved the IV, V, and VIII Couinaud segments with an heterogeneous density lobulated with gross septa and multiple calcifications (Fig. 1). These findings were confirmed by magnetic resonance imaging (MRI) (Fig. 2). A core needle biopsy was performed. Microscopic description revealed fibro connective tissues with fibroblasts fascicles, dystrophic calcification areas, flat stratified and keratinized epithelium, and sebaceous glands as features of mature liver teratoma. Based on previous findings and the diagnosis confirmed by histopathology, a residual liver volume was calculated by CT. It was measured to be 32.33%; with these findings, the surgical team decided to performed a surgical treatment. An exploratory laparotomy was performed with findings of a liver tumor of 150 mm × 120 mm that involved the right lobe, IV, V, and VIII segments that caused extrinsic compression of the inferior vena cava. It was also adhered in its cephalic pole to the right hemi diaphragm. At pelvic recesses, gliosis was also found. No other organs were involved. A right extended hepatectomy was performed without incidents (Fig. 3–5). Post-surgical evolution was favorable. She was discharged at seven days after the surgery. 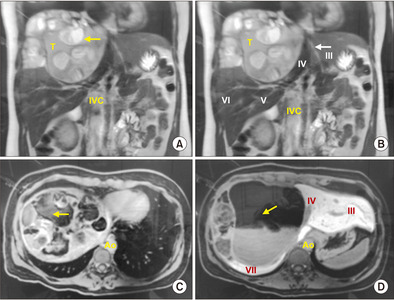 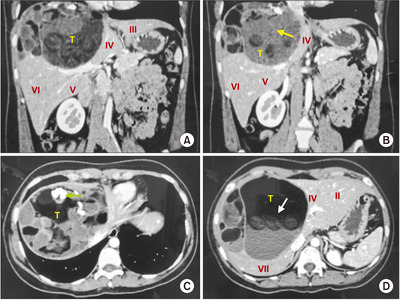 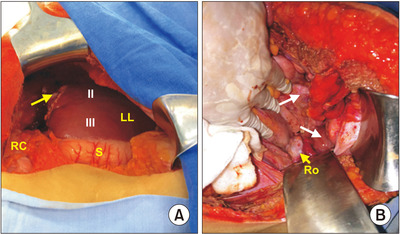 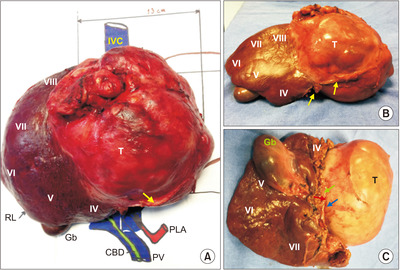 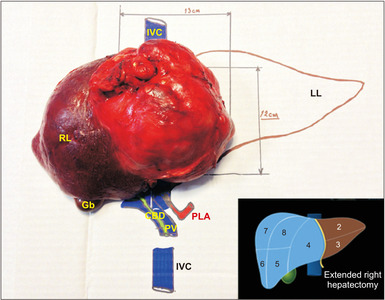 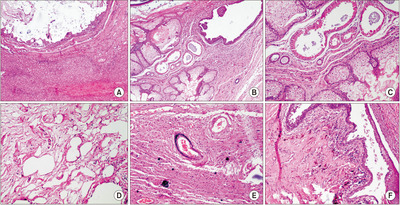 Currently, the patient is under surveillance without relapse at the liver. However, a new heterogeneous mass at the right ovary of 50 mm as a possible teratoma was found.

Most of the reported LTs have been described in infants under 3 years old, exhibiting their primitive germ cell origin. LTs are exceptional in adults. As mature teratomas tend to grow slowly, they are more likely to be diagnosed incidentally while patients are asymptomatic. Clinical symptoms can show due to compression and obstruction of surrounding organs. Occasionally, an acute abdomen can develop as a unique manifestation [4].

LTs are more common in females without any apparent relation. They are more commonly found in the right lobe liver. LTs are usually well encapsulated tumors that can be easily dissected from the rest of the liver parenchyma. Complete resection of the lesion continues to be the best therapeutic choice [5].

Macroscopically, a teratoma usually appears as a well‐demarcated and encapsulated mass with a variegated cut surface, which comprises soft or fleshy areas, cystic areas containing keratinaceous debris or hair shaft, mucoid, or serous materials. Teeth and bone can be present. Histologically, a teratoma is composed of several somatic tissues, with various degrees of maturation and a disorganized distribution. A teratoma is distinct in mature and immature forms, depending on the resemblance to adult or fetal tissues. In immature teratoma, neuroectodermal tissue constituting tubules and rosettes is the most common fetal‐appearing tissue observed. Other fetal tissues including primitive mesenchymal tissue, cartilage, bone, and rhabdomyoblasts are rarely observed [9]. Teratoma classification is summarized in Table 1 [10].

Mature teratomas contain well-differentiated histology elements derived from at least two of the three embryonic cell layers: ectoderm, mesoderm, and endoderm. On imaging, they have distinctive features allowing an accurate preoperative diagnosis, on plane films, they can show as a liver masses with calcifications. Occasionally, opacity secondary to a fatty component can be shown. At ultrasonography, there may be a hypoechoic or anechoic component secondary to the cystic portion of the mass. Hyper echogenic foci can be due to calcifications or fat. CT and MRI are helpful for localizing lesions and determining their spatial relationships with surrounding structures. They can also be characterized based on densities within the lesion suggestive of fat, sebaceous material, or cystic elements [11]. On certain occasions, radiological diagnosis could not be possible and a biopsy with histological examination is required to have a definitive diagnosis [12].

Ovarian mature teratomas can grow over time, increasing the risk of pain and ovarian accidents. The treatment for mature teratomas is surgical excision which is almost always curative. Partial resection should be limited to patients in whom a complete resection in not technically feasible. There is no evidence-based consensus on the size above which surgical management should be considered. Most studies have used an arbitrary maximum diameter of 5–6 cm amongst their inclusion criteria to offer expectant management. Caspi et al. [13] have performed a prospective study, to evaluate the progress of ovarian mature cystic teratoma over 3–5 years. They found, that the mean rate of growth of the cyst was 1.5–1.7 mm per year. The ACOG (The American Congress of Obstetricians and Gynecologists) guidelines state that adnexal masses diagnosed during pregnancy appear to have a very low risk for both malignancy and acute complications. Therefore, they may be considered for expectant management [13,14].

Mature teratomas are relatively insensitive to both radiation and chemotherapy. For immature ovarian teratomas, current treatment options include an initial staging procedure. Grade 1 and early stage do not require adjuvant treatment. Postoperative surveillance is recommended. GCTs can be managed by postoperative chemotherapy [11]. In other extragonadal sites (mediastinal immature teratomas), four cycles of cysplatin-based chemotherapy followed by complete surgical resection is suggested if technically feasible, rather than an initial surgery. Etoposide, ifosfamide, and cisplatin (VIP) are preferred rather than bleomycin, etoposide, and cisplatin (BEP) because of their risk of pulmonary toxicity.

LTs are extremely rare. To date, there are few cases reported in adult population. After a bibliographic research in PubMed, we found 11 cases of liver teratoma up to 2018. The treatment consisted of anatomic hepatectomy in four of them, enucleation in three, partial excision in two, and surveillance in only one case. Complete paper and patient data could not be obtained for one case. Thus, only 10 cases were assessed. Results are shown, in Table 2 [12-23].

Table 2 . Liver teratoma characteristics of reported cases from 2003 to 2018

Gliomatosis peritonei (GP) is an unusual condition often associated with ovarian immature teratomas, it is characterized by the presence of mature glial tissue on peritoneum [24]. In other rare cases, it shows ventriculoperitoneal shunt [25,26]. Despite GP extension, it is not associated with a worse prognosis [27]. Nevertheless, malignant glial transformation has been reported. GP is considered as grade 0 teratoma. Its management is conservative. The presence of GP might indicate mature or immature teratoma metastasis [28].

Although GP is associated with capsular rupture of ovarian teratoma in most cases, there is genetic evidence showing that it could have a different genetic identity, thus generating a discussion about whether GP is an associated or an independent phenomenon [29].

Recurrence of ovarian mature cyst teratomas is very rare after surgical excision (4.2%). In a study of 382 patients, young age (< 30 years), large cyst (> 8 cm in diameter), and bilaterality were significant risk factors for recurrence [30].

Neoplasm metastasis originating from a primary tumor has one type of tissue which undergoes malignant transformation. It is entirely different in the case of teratomas as primary tumors, due to the characteristics of teratomas which are composed of several tissues, either from one or more germ layers. They are not present in the region of origin. A single tissue in a benign teratoma may undergo malignant transformation and this one tissue, either carcinomatous or sarcomatous, may metastasize [31].

A search was carried out in PubMed from 1920 to 2021 to try to explain the hepatic relapse under the name of mature teratoma liver “metastasis”. This search revealed very little information about metastasis in the liver of mature teratoma as observed in our patient.

Kommoss et al. [32] have described a case of rupture of an ovarian mature cystic teratoma causing intraperitoneal spillage of tumor contents and, leading to recurrence as cystic masses in the liver and colon 17 years after. On the other hand, there is only one reported case of recurrence as a non-intrahepatic perihepatic mass shown as, a mature teratoma with GP [33], as in our case.

Okino et al. [34] have reported a case of mature teratoma and its development in the diaphragm 34 years after removing the primary one in the left ovary, in which the metachronic term is included as the best possibility to distinguish it from recurrence, explaining the following: with a 34-year interval from the excision of the primary tumor, the presence of the 3 primitive germ layers and, absence of gliomatosis (unlike our case), indicate the final diagnosis as “mature cystic teratomas showing multicentric and metachronous developments at multiple sites.”

Li et al. [35] described a rare case of giant liver metastasis, very similar to ours. However, their occurred in the context of growing teratoma syndrome in which condition are characterized by persistence or the development of enlarging masses following an adjuvant chemotheraphy during treatment for GCTs.

In conclusions, our case demonstrates an extremely uncommon late metachronous relapse in liver localization of mature teratoma and the surgical challenge due to its size, parenchymal extension, and presence of GP. Surgical excision is the treatment of choice. This entity has an excellent prognosis.

The authors thank the group of residents and hospital staff at Hospital Oncologia Siglo XXI who work hard every day in anonymity to bring hope to patients.