Abstract
Laparoscopic cholecystectomy has a reported incidence of 4%–15% of conversion to an open procedure and one of the main reasons behind the conversion is a gallbladder (GB) wrapped with dense adhesions. It is prudent to convert the procedure to an open operation in patients with particularly dense adhesions when the GB is not visible, preventing safe dissection which carries a potential risk of duodenal or colonic injury. The technique described, namely laparoscopic ‘D2 first’ approach, enables the completion of laparoscopic procedure in patients with ‘obscure’ GBs.
Keywords : Gallbladder; Cholecystectomy; Laparoscopy; Pericholecystic adhesions

Laparoscopic cholecystectomy is among the commonly performed laparoscopic procedures. The reported incidence of conversion to an open procedure is 4%–15% and one of the main reasons for the conversion is a gallbladder wrapped with dense adhesions [1,2]. It is considered as a good judgement to convert the procedure to an open operation in patients with particularly dense adhesions when the gallbladder cannot be seen, precluding safe dissection which carries a potential risk of duodenal or colonic injury. The technique described herein, the laparoscopic ‘D2 first’ approach, would enable the completion of laparoscopic procedure in a patient with an ‘obscure’ gallbladder.

A 60-year-old male with a body mass index of 24.5 kg/m2, with no comorbidities, underwent surgery for acute cholecystitis four months before. An acutely inflamed gallbladder, pericholecystic omental adhesions with an obscure Calot’s triangle were mentioned in the operation reports. He underwent a laparoscopic subtotal cholecystectomy, but the method adopted for closure of gallbladder remnant was not disclosed. He presented to us with recurrent biliary colic. Ultrasound of the abdomen (USG) showed residual gallbladder with calculi and magnetic resonance cholangiopancreatography (MRCP) showed remnant gallbladder, thickened gallbladder wall and choledocholithiasis. An endoscopic retrograde cholangiography (ERC), common bile duct (CBD) clearance, and CBD stenting were done. He was admitted for laparoscopic completion cholecystectomy. Under general anesthesia, his abdomen was cleaned and draped. Procedure was carried out with standard four ports (Fig. 1). The parietal adhesions were removed. Dense adhesions were encountered in the right upper quadrant (Fig. 2). Adhesions were released in a right-to-left direction, from undersurface of segments six and five. However, the remnant gallbladder could not be exposed. Then, adhesions from the undersurface of segment four were removed to expose the gallbladder. However, this step was also unsuccessful. Next, a top-down approach to release omental adhesions from the inferior surface of liver towards gallbladder was taken up. During this step, a colonic fistula was suspected. Failure to make progress, suspicion of colonic fistula and an obscure gallbladder led us to adopt the laparoscopic ‘D2 first’ technique as described below. 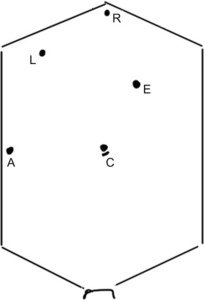 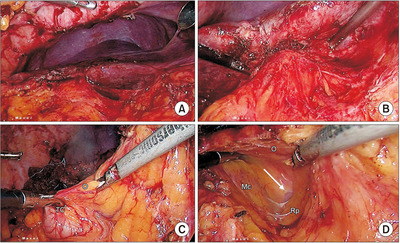 Fig 2. (A) Dense sub hepatic adhesions, (B) obscure gallbladder, (C) division of the O to gain access into the lesser sac, (D) tunnel created by sweeping the O off the transverse mesocolon (Mc). Note the traction provided by the left-hand instrument forming the apex of the triangle. Second part of the duodenum is visible at the far end of the tunnel (arrow). TC, transverse colon; Rp, omentum; O, greater omentum.

Apart from the standard four ports, an additional five mm port was inserted midway between the xiphisternum and the umbilicus slightly to the left of midline. Omentum adjacent to mid-transverse colon was retracted caudally with the left-hand grasper. The antrum of the stomach was retracted cranially from the epigastrium by the assistant spreading out the gastrocolic omentum. Harmonic shears (Ethicon, Raritan, NJ, USA) were used to divide the omentum and gain access into the lesser sac. At the medial end of the lesser sac, dissection was continued to the right, separating the fused embryonal avascular plane between the transverse mesocolon and the leaves of greater omentum using gentle sweeping movements keeping the active blade of harmonic in view during dissection (Fig. 3). Progressive dissection from left-to-right gradually resulted in exposing the anterior surface of the pancreas and the second part of the duodenum. Area corresponding to the ‘bare area of the duodenum’ created by the transverse mesocolon was reached. It was important to stay in the avascular plane and avoid bleeding from the gastroepiploic vessels cranially or entry into the transverse mesocolon caudally. Gentle anterior traction by left-hand grasper placed into this space lifted the apex of the triangle. The boundaries of this triangle were the base (retroperitoneal structures) formed initially by the head of the pancreas and later on by the second part of the duodenum, cranially by the gastrocolic omentum and caudally by the transverse mesocolon. The dissection proceeded in an avascular plane to the right of the duodenum, in-front of the Gerota’s fascia, and the left-hand grasper was progressed gradually while maintaining its anterior and slightly caudal traction. A part of the gallbladder was visualised. The Harmonic entered the general peritoneal space in the right sub-hepatic region. During this dissection, the caudal wall of the tunnel was formed progressively by a greater length of the transverse mesocolon, with the anterior traction of left hand forming the apex of the triangular tunnel. The omentum was progressively divided, and this resulted in the transverse colon falling caudally. As a next step, with the colon off the operative field and second part of the duodenum in view, the omental adhesions were progressively lysed off the gallbladder. The rest of the procedure was completed in the usual manner. 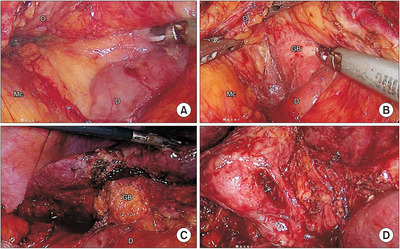 Fig 3. (A) Triangle formed by the duodenum (D) and the head of pancreas, mesocolon (Mc) and O is well defined. (B) Visualization of the gallbladder (GB). Note that the Mc is completely separated from the GB with only O remaining attached. (C) Colon free and away from the operative field. (D) Critical view of safety. O, greater omentum.

The postoperative recovery of the patient was uneventful. The CBD stent was removed endoscopically three weeks later and at two years follow-up, the patient remained asymptomatic.

This technique was employed in six patients successfully. In two patients, the laparoscopic procedure was abandoned elsewhere as the gallbladder was obscure. Of the remaining four, there was one symptomatic gallstones in a residual gallbladder (previous laparoscopic subtotal cholecystectomy–case reported above), gallstones with cirrhosis, recurrent acute cholecystitis presenting in the fourth week (treated conservatively elsewhere initially) and empyema gallbladder with cholecystoduodenal fistula with gallstone ileus. All patients had dense adhesions with an obscure gallbladder. The laparoscopic ‘D2 first’ technique allowed exposure of the gallbladder in all cases and resulted in successful completion of procedures laparoscopically. Because this technique involves dissection in an avascular plane, there was no blood loss. The technique could be accomplished in less than 15 minutes. The post-operative course was uneventful in all patients and they were discharged from hospital 24 hours after surgery (Supplementary Video 1).

There are several reasons a laparoscopic cholecystectomy may be converted to an open cholecystectomy [3,4]. The most common reasons include an obscure Calot’s anatomy, internal fistulae (duodenal/colonic), adhesions because of previous surgery or cholecystitis, suspicion of malignancy, hemorrhage and bile duct injury. The rate of conversion is higher in the early career of a surgeon [2,5]. Several measures to overcome intra-operative challenges regarding difficult dissection in the hepatocystic triangle have been described, viz; antegrade dissection, different variations of subtotal cholecystectomy, use of intra-operative cholangiogram, taking help from a senior colleague, fluorescence cholangiography, to help complete the procedure laparoscopically [4,6-10]. Apart from the aforementioned reasons for conversion, there is a group of patients whose operation may not progress to an extent where the above techniques could be used. These include patients with dense adhesions, wrapping a chronically inflamed gallbladder wherein all attempts at releasing adhesions seemed to fail. Releasing the sub-hepatic adhesions ‘right-to-left’ freeing the undersurface of liver to the right of the gallbladder, lysing omental adhesions left of the gallbladder in a ‘left-to-right’ fashion keeping the antrum and duodenal first part in view are ways to increase the chances of success in pericholecystic adhesiolysis. When the omental adhesions are accompanied by duodenal and colonic adhesions obscuring view of the gallbladder, there is an additional risk of injuring them on persistence with the laparoscopic procedure. Conversion to open surgery seems inevitable in these cases for the sake of safety and is considered as a matter of sound judgement rather than a failure.

Lysis of the inflammatory adhesions is associated with ongoing ooze, making dissection difficult. It is suggested to start dissection from a ‘virgin’ area where tissue planes are preserved and later narrow down to the area of interest. The techniques described to lyse sub-hepatic adhesions followed these principles. If one examines how an open surgery is successful in these difficult cases, it would be clear that the surgeon has an operative view that enables him/her to remove the hepatic flexure from the operative field. Then proceed with the right-to-left mobilization, exposing the second part of the duodenum. By this time, a part of the gallbladder comes into view. These landmarks thus enable the surgeon to lyse the pericholecystic adhesions with confidence and complete the operation successfully. In addition, the surgeon has an advantage of tactile sensation. In laparoscopy, the view is from the caudal end, different from the one in the open surgery. The technique described in this study followed the same basic principles of starting in a virgin and inflammation-free area. Then, we identified the known landmark of the duodenal second part and got the transverse colon, and where required, the hepatic flexure of colon adequately far from the pericholecystic area. The view offered by laparoscopy permitted this dissection to be done in a ‘nontraditional’ way in a laparoscopic cholecystectomy, to expose the second part of the duodenum and remove the transverse colon from the gallbladder. This is based on sound surgical principles, utilizing the embryologically fused, avascular plane, enabling the surgeon to use the non-inflamed lesser sac (omental bursa) to reach the inflamed area in the greater bursa by identifying the distal second part of the duodenum which was unaffected by the inflammation (Fig. 4). With the colon away from the gallbladder and the duodenum in view, the rest of the procedure was completed in the usual manner. Since our technique aimed at exposing the relatively fixed landmark, namely the second part of the duodenum which guided further course of the surgery, we have called it the laparoscopic ‘D2 first’ approach.

Fig 4. (A) Peritoneal attachments. The procedure of laparoscopic ‘D2 first’ approach involves opening of the lesser sac and dissection along the virgin, non-inflamed, fused embryonal avascular planes of the transverse mesocolon (Mc) and the leaves of the greater omentum to identify the second of the duodenum and then to enter the general peritoneal cavity. This identifies the critical structures during laparoscopic cholecystectomy—colon and duodenum. Thus, helps in separating the colon from the gallbladder (GB). (B) Bare area of the duodenum, corresponding to the Mc (block arrow) and the pancreas (line arrows). To the left of the bare area is the lesser sac and to the right is the greater sac or the generalized peritoneal cavity. Laparoscopic ‘D2 first’ approach involves traversing from the lesser sac to the greater sac. (C) Diagrammatic representation showing adhesions between the GB and the transverse colon (TC) and the first part of the duodenum (D1). The area (triangle) between the Mc and the second part of the duodenum (D2) is free from adhesions with maintained tissue planes, this forms the basis of laparoscopic ‘D2 first’ approach.

We believe that in patients undergoing laparoscopic cholecystectomy who have dense subhepatic adhesions, a colonic fistula, or a remnant gallbladder wrapped in dense adhesions and whereby the usual methods of exposing the gallbladder failed, the laparoscopic ‘D2 first’ approach must be considered. The technique facilitates exposure of the obscure gallbladder enabling successful laparoscopic completion of the procedure. This can be safely performed, with minimal blood loss, and is not time consuming. This technique would presumably be inappropriate in patients with episodes of severe pancreatitis with obliterated lesser sac in the past, a previous gastric surgery or a right colonic surgery.