Abstract
Various topical hemostatic agents can help induce coagulation at the liver cut surface. However, hemostasis is usually ineffective in controlling bleeding. We present a case of rescue fibrin glue-infiltrating hemostasis combined with hepatorrhaphy to manage intractable postoperative bleeding from the liver cut surface. The case was a 56-year-old male patient with hepatocellular carcinoma in hepatitis B virus-associated cirrhotic liver. The patient was administered warfarin because of graft replacement of the ascending aorta and hemi-arch one year earlier. After warfarin was discontinued, segment VII partial hepatectomy was performed according to standard procedures. However, considerable bleeding occurred during and after hepatectomy. Bleeding from the liver cut surface was controlled over one hour using surface coagulation and topical application of four kinds of hemostatic agents. However, active abdominal bleeding led to reoperation soon after the hepatectomy. During the reoperation, we identified diffuse oozing from the edge of the liver cut surface which was difficult to control. Thus, we performed direct parenchymal injection of fibrin glue at the bleeding points using 12 fibrin glue kits which induced complete hemostasis. Because the patient would undergo anticoagulation again soon after the operation, we also performed hepatorrhaphy. The patient recovered uneventfully after the reoperation. He has been doing well for six months without complications. In conclusion, fibrin glue-infiltrating hemostasis effectively controlled intractable bleeding from the hepatic cut surface in our case. Thus, it can be considered as an optional method for rescue hemostasis.
Keywords : Hemostasis; Fibrin glue; Bleeding; Hepatectomy; Liver cirrhosis

In patients with liver cirrhosis, any minor parenchymal injury can cause intractable bleeding that cannot be easily controlled. During hepatectomy or living donor liver transplantation, bleeding from the liver cut surface is occasionally difficult to control. Under such situation, deep suturing at the liver cut surface may produce additional damage, further complicating bleeding control. Various topical hemostatic agents have been developed to help induce coagulation at the liver cut surface. However, their bleeding control efficiency is often limited. Thus, they cannot guarantee complete hemostasis [1-5]. Although some of them provide mechanical coverage through adhesion over the liver cut surface, their adhesive power is not strong enough to control oozing effectively. As a change of ideas, we have developed a local-infiltrating hemostasis technique in which fibrin glue is directly injected into the bleeding area of the liver [6]. We have applied this technique several times in unique situations requiring delicate bleeding control during living donor liver transplantation and hepatectomy. We present a case of rescue fibrin glue-infiltrating hemostasis combined with hepatorrhaphy for intractable postoperative bleeding from the liver cut surface after partial hepatectomy for hepatocellular carcinoma (HCC).

The patient was a 56-year-old male with HCC in a hepatitis B virus-associated cirrhotic liver. The 3.8 cm-sized liver mass at segment VII was diagnosed as HCC based on imaging studies (Fig. 1). One year earlier, the patient underwent graft replacement of the ascending aorta and hemi-arch (modified Bentall procedure) due to acute aortic dissection and cardiac tamponade (Fig. 2). Tumor marker studies showed α-fetoprotein level of 1.6 ng/mL and prothrombin induced by vitamin K absence-II level of 23,322 mAU/mL due to warfarin administration for aortic arch replacement. 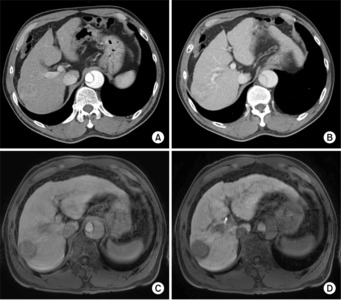 Fig 2. Preoperative computed tomography images of aortic dissection. (A) Graft replacement of the ascending aorta and hemi-arch is visible (arrow). (B) Dissection is visible at the abdominal aorta (arrow), which precludes transarterial embolization.

Warfarin was stopped at 5 days before surgery, raising the prothrombin time (PT) to 63.2% and the PT international normalized ratio (INR) to 1.29. The platelet count was 7.6 x 103/μL. To correct the PT INR, vitamin K1 was administered twice intravenously. The indocyanine green retention test at 15 minutes was 11.6%. To minimize the operative risk for this compromised patient, we decided to perform partial hepatectomy to remove the HCC at segment VII. 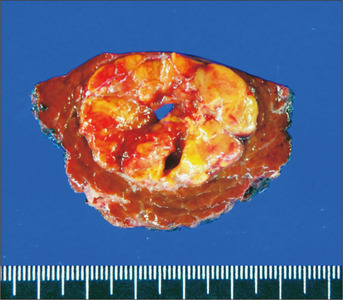 After partial hepatectomy, spotty oozing continued, even after heavy cauterization over the liver cut surface with an argon beam coagulator. To achieve complete hemostasis, Surgicel (oxidized regenerated cellulose), TachoSil (fibrinogen‐impregnated fleece), FloSeal (matrix hemostatic sealant), and fibrin glue were applied topically over one hour on the liver cut surface. Because the patient would undergo anticoagulation soon after the surgery, we meticulously controlled the bleeding and observed him for additional 40 minutes. After absence of bleeding was confirmed, the abdominal incision wound was repaired.

However, two hours after the surgery, the abdominal drain yielded sanguineous fluid, indicating active bleeding. Immediate postoperative dynamic liver computed tomography (CT) showed that the bleeding sites appeared to be the edges of the partial hepatectomy (Fig. 4). Radiologic intervention with transarterial embolization was considered. However, it was impossible due to extensive dissection of the thoracic and abdominal aorta. Because the amount of bleeding through the abdominal drains was increased, we performed an emergency laparotomy at six hours after closure of the abdomen. 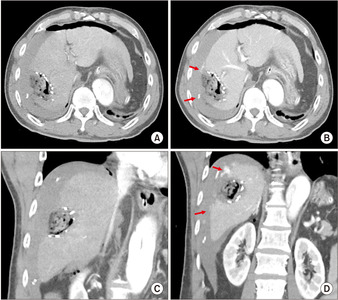 During the reoperation, we identified diffuse oozing from the edge of the liver cut surface. Spotty oozing was also found after removal of the topical hemostatic agents attached on the liver cut surface. The oozing was ceased during manual compression, but restarted after the compression was released. Topical application of Surgicel and TachoSil was ineffective in controlling the bleeding due to the state of disseminated intravascular coagulation.

At that time, we thought that powerful mechanical hemostasis could effectively manage the situation. Thus, we prepared 12 sets of 2-mL fibrin glue kits (Greenplast; Green Cross, Seoul, Korea). Tissue injection of fibrin glue was repeated 12 times at the approximately 50 cm2 area of the liver cut surface. The injection technique consisted of insertion of the needle 0.5–1 cm deep at the bleeding point and forceful injection of 1 mL of fibrin glue, followed by slow withdrawal of the needle with continuous forceful injection of the remaining 1 mL of fibrin glue. Soon after completion of this process, the bleeding stopped completely. No bleeding occurred during the 30-minute observation period.

Because the patient would undergo anticoagulation again soon after the operation, we performed second-step mechanical hemostasis including hepatorrhaphy and suturing of the liver wound. Edges of the hepatic parenchymal defect were meticulously closed with pledgeted sutures using 4-0 Prolene. The dead space of the hepatectomy was filled with Surgicel fragments. After additional observation for 40 minutes, the abdomen wound was repaired again. 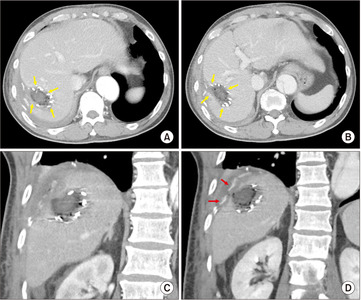 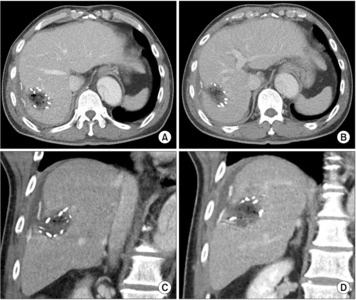 Fig 6. Postoperative computed tomography images taken at nine days after reoperation. (A, B) There is no evidence of bleeding. (C, D) The size of hepatic parenchymal defect is reduced without abnormal findings.

Fibrin glue sealants are a group of topical hemostatic agents that mimic the final stage of the blood coagulation process. They are two-component products containing thrombin and fibrinogen. When these two components are mixed together during application, the thrombin cleaves the fibrinogen to monomers, which polymerize to form a fibrin gel [3,4]. Fibrin glue sealants come in two-component vials to create glue, but they also can be carried on a matrix as carrier-bound fibrin sealants. Carrier-bound sealants are available in two forms, a solid form consisting of collagen fleece coated with a dry form of fibrinogen and thrombin, and a liquid form containing thrombin and gelatin or thrombin and collagen [5]. A meta-analysis study including 10 randomized controlled trials with 1,225 patients has indicated that there is no solid evidence showing that routine use of fibrin sealants can reduce the incidence of postoperative hemorrhage or bile leakage compared to other treatments [2]. Although we have used fibrin glue sealants in the majority of liver resection cases for a long period, there is still lack of evidence on their efficacy in reducing postoperative resection surface-related complications.

In the present case, we used four types of topical hemostatic agents (TachoSil, FloSeal, Surgicel, and fibrin glue) during the initial hepatectomy because it was very difficult to control the spotty oozing from the liver cut surface. Since the spotty oozing did not stop even after heavy cauterization of the liver cut surface with an argon beam coagulator, these hemostatic agents were applied sequentially for one hour. After absence of bleeding was confirmed, the abdominal wound was closed. However, two hours after the surgery, sanguineous fluid from the abdominal drain indicated active bleeding. The bleeding site was identified on dynamic liver CT. Radiologic intervention with transarterial embolization was initially considered. However, we found that it was impossible due to wide dissection of the abdominal aorta.

During reoperation, we identified diffuse oozing from the edge of the liver cut surface. Spotty oozing was also found after removing the topical hemostatic agents attached on the liver cut surface. The oozing was stopped during manual compression, but restarted after releasing the compression. Application of the abovementioned topical hemostatic agents did not control the bleeding due to the state of disseminated intravascular coagulation.

At that time, we thought that powerful mechanical hemostasis could effectively manage the situation. Thus, we prepared 12 sets of 2-mL fibrin glue and injected them over the entire liver cut surface. Soon after completion of this process, the bleeding stopped completely. Unlike topical spray of fibrin glue, fibrin glue-infiltrating hemostasis anchors the glue in the hepatic parenchyma, where intraparenchymal glue drops mechanically compress the surrounding minute bleeding vessels and strongly attach to the liver cut surface. Our method is a conceptual shift from the conventional use of topical spray to tissue infiltration. We have previously presented a gross photograph of the fibrin glue injection technique and cross-section image of the fibrin glue-infiltrated liver parenchyma showing dispersed fibrin glue drops [6].

The injection of fibrin glue superficially penetrates into the hepatic parenchyma and coagulated gel drops can form within a few seconds, producing no systemic effect or drainage into blood vessels. However, special attention should be paid to the location of the fibrin glue injection. If the tip of the needle is accurately located within the hepatic vein, the injected fibrin glue can be directly drained into the blood stream. We experienced one case of such an accidental injection, which resulted in a temporary sudden drop of blood pressure. To prevent such an accidental injection, our suggestion is to perform the injection when resistance is felt during syringe injection because if the needle tip is located in the vein lumen, injection resistance will disappear.

After fibrin glue-infiltrating hemostasis, we additionally performed hepatorrhaphy. Because the patient would undergo anticoagulation again soon after the operation, we had to use every available hemostasis method at the reoperation. The edges of the hepatic defect were meticulously approximated with multiple pledgeted sutures using 4-0 Prolene. This functioned as reinforcing mechanical hemostasis.

We have applied fibrin glue-infiltrating hemostasis in more than 10 cases of living donor liver transplantation using a modified right liver graft because this technique can effectively control graft liver cut surface bleeding near the middle hepatic vein conduit, where usual cauterization methods using electrocautery or argon beam coagulation cannot be used because they would harm the vascular suture materials. This technique can also effectively control bleeding from the spleen because the mechanism of hemostasis is the same in both the liver and the spleen [6].

In conclusion, our fibrin glue-infiltrating hemostasis can effectively control intractable bleeding from the hepatic cut surface. Thus, it can be considered an optional method for rescue hemostasis.